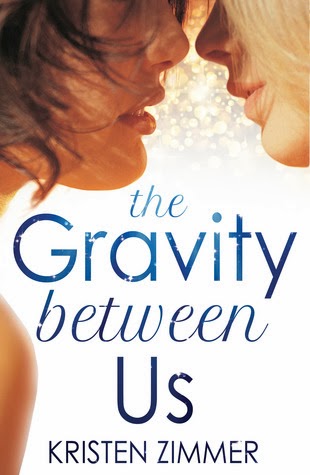 I’ve been seeing The Gravity Between Us, by Kristen Zimmer, quite a bit lately and was impressed by the amount of reviews it had in a short amount of time. I decided it was time to read it to see what the fuss was about.

Payton has been in love with Kendall for a long time. Kendall on the other hand doesn’t suspect that Payton is a lesbian and Kendall never for a second thought that Payton liked her. When Payton comes out to her, Kendall sees her best friend in a different light.

All of a sudden Kendall is awkward around her. Not because Payton is gay. But she’s jealous that Payton will find someone and Kendall doesn’t want to lose her. Then she realizes that she has feelings for Payton beyond friendship, but she struggles with these feelings. Before now, Kendall never thought she was a lesbian. And she’s an up and coming Hollywood star. Coming out of the closet for her is not an easy decision and will be scrutinized by her fans and the general public. Her private life is anything but private. Can she admit that she loves Payton? And can Payton handle all the media if Kendall lets the world know?

Young love is fun, crazy, and confusing. This story felt real to me and reminded me of my first love (minus the Hollywood fame) and how excited and confused I was at the time. Zimmer did a fantastic job of capturing the voices of Payton and Kendall. Even though this love story has a predictable plot, I ended up liking it. It was odd for me reading this book, since I knew where it was heading, but I kept reading and had a hard time putting the book down until I finished. And I was cheering on the young lovers.

It was interesting to read this book now with all the hoopla about Ellen Page and football star Michael Sam. Coming out is a scary aspect that many gays and lesbians have to face. Personally I can’t imagine the pressure and fear that famous people have to deal with. It’s not fair, really. But I have to admire their bravery. Bravo.