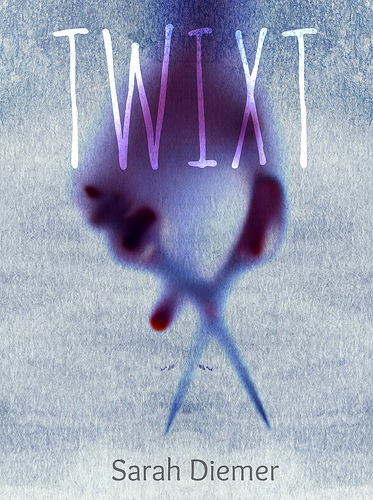 Sarah Diemer’s Twixt drew me in from the first sentence, sunk its claws into me, and didn’t let go until the last page. The novel is named after the world it resides in – Twixt – and the world is a strange, frightening, utterly fascinating one. People wake up in Abeo City with no memories, and they’re forced to navigate a world that doesn’t work like the one we’re used to. Walls can be walked through, people barter hair for things they want, and everyone lives in fear of the Snatchers – skeletal, birdlike monsters that swoop down and take away anyone caught outside at night.

The narrative follows Lottie, a girl who proves from the beginning to be an exception to so many rules. People usually appear in Twixt at one of Abeo City’s crossroads at midnight, but Lottie wakes up outside of the city. She also appears to be immune to Nox, a drug that the people of Abeo City use to regain a memory from their past. The story centers around the mystery of Lottie’s past and is interwoven beautifully with her relationship with Charlie, an idealistic and deeply courageous girl whose job it is to retrieve new arrivals from the crossroads before they’re attacked by a Snatcher.

The growing relationship between Lottie and Charlie and the rich development of the world in Twixt are what drew me in and kept me captivated. I constantly long for genre stories in which the main characters are lesbians – fantasy and historical fiction and sci-fi and horror – and I think Twixt falls into the Young Adult dark fantasy category. It’s very suspenseful. The atmosphere really creates a feeling of oppression, dread, and the unknown: the landscape of woods outside the city is flooded with images of a red sky behind black bars of trees, and inside the city, the decrepit, dust-covered, crumbling areas are contrasted with a Victorian-esque affluent section. Through all of it, Lottie’s emotions are so close to the reader that I felt swept along with the story. Her relationship with Charlie felt so authentic, especially considering that, with so many mysteries and secrets, they struggle with telling each other the truth. At the same time, their relationship is incredibly uplifting and made me want to punch the air with triumph several times.

There are so many twists involved in this story that it’s hard to talk about without spoilers. I was really struck by the strength of the characters and the compassion they show. I really enjoy books that restore my faith in people through the characters; Lottie has such incredible courage in the face of really awful, soul-searing things, and Charlie has a tremendous amount of goodness and hope in her. All of the characters have their flaws and downfalls, and even the side characters are multi-faceted. My favorite lesbian books are ones where the fact that the characters are lesbians is only a part of it, informing their experience but not engulfing it. The messages of compassion and hope made this a very fulfilling read for me.