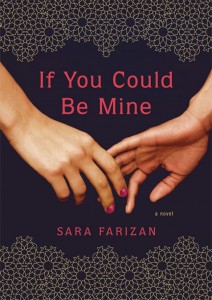 Sara Farizan’s If You Could Be Mine tells a story that I don’t think has ever been told in Young Adult fiction before, and it’s an important one. Set in contemporary Iran, it’s told from the point of view of 17-year-old Sahar, who has been in love with her best friend Nasrin for almost as long as she can remember. Luckily for her, Nasrin loves her back. Unluckily for both of them, homosexuality is illegal. But they can still share their love in secret, at least until the day Nasrin’s family announces she is to be betrothed–to a dude. While there’s nothing for Nasrin to do except go along with it, Sahar sinks into ever increasing despair, determined to stop the wedding at any cost. Her solution becomes this: transition to being a man, as gender reassignment surgery in Iran is, funnily enough, legal.

I was thrilled to receive an advanced copy of this book, as it’s been on my radar for a while. Yet I found myself slightly disappointed with certain things as I made my way through it. I found parts of it didactic, yet with books that introduce details about a culture to a (young) Western audience that more likely than not knows very little about it, I concede that basic explanations woven into the storytelling are necessary. I had also been nervous about how this would translate for the trans community, as it presents an excruciating conundrum: faking trans emotions seems offensive (obviously), but at the same time the fact that Nasrin would be pushed to such ideas necessarily highlights the painful absurdity of the entire situation. But in the trans community that Nasrin joins to get advice and encouragement in the novel, I found that Farizan was able to balance this well by showing trans folk who actually were living their truths, and the varying spectrum of pain that went along with that, whether their “condition” was “legally treatable” in their country or not.

I guess my main issues with the novel were personal annoyances with the main characters themselves. While I started the book in extreme sympathy for Sahar, as she declines further and further into her desperate plans, she becomes single minded in a completely irrational way. When people repeatedly warn her of all the negative outcomes or futility of her desires, she seems to shrug them all away, essentially saying over and over–I don’t care. I need to be with Nasrin. On the one hand, I question whether I even have a right to criticize Sahar. The most obvious reason being that as a privileged white girl from America, how can I look down on how Sahar reacts to the harsh reality of a world I can’t begin to truly understand? How obnoxious am I?

And for another thing, we all know that teenage love does indeed make you completely irrational and single minded. So in reality, there was probably a large amount of truth to Sahar’s stubbornness. It was just a truth I find annoying. Because the thing that bothered me most was that I didn’t find Nasrin likeable at all. She’s consistently portrayed as a shallow, selfish girl who yes, probably loves Sahar very deeply on the inside, but doesn’t have the conviction to show it as Sahar does. So while Nasrin drove herself to insanity over this girl, I couldn’t even truly sympathize with her motivation. Maybe if the novel was longer, and we had more of a chance to really get to know both Sahar and Nasrin through deeper character development, I would have felt completely differently about the whole thing.

Because at this point in YA, I expect more. Yes, while teenagers can be irrational, I really wanted more internal struggle within Sahar about what she was doing to herself, her body, her mind, in exchange for a girl who might not deserve it. I wanted more rage not just at the boy who was set to marry her beloved, but at the system as a whole, at the government, at the wider world who lets it happen. Farizan proved she could show grit in her descriptions of some other minor characters and the struggles they bore to survive. I wanted more of that grit for Sahar.

This all said: Would I still stock this book in a middle school or high school classroom? Would I put it on display at libraries? Absolutely. It still opens the door to discussions that need to be had, and can educate a lot of young people who have grown up in an It Gets Better North American psyche who may have no idea of the struggles other young people just like themselves endure in different parts of the globe. And after getting through all the frustrating middle parts, I actually did really like the ending.

If You Could Be Mine will be released in August 2013.