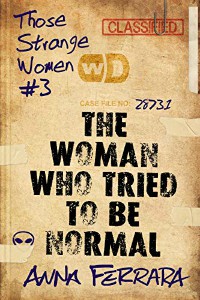 I read a very great deal, but I’m kind of like a butterfly; while there are some things which will always draw my attention the most, I flit around quite a bit otherwise.  When The Woman Who Tried to Be Normal landed in my inbox, I was intrigued to see that its protagonist was a synesthetic woman.  I freely admit that I opened it strictly on that basis alone.