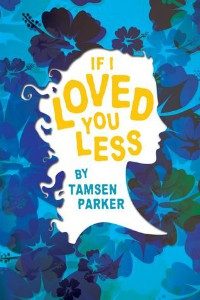 Theo Sullivan lives on an island like paradise with her slightly overprotective father, content with how things are. The community in Hanalei is tight-knit: everyone knows everyone, outsiders rarely stay for long, and nothing can really remain a secret. Personally, the island setting and its descriptions were my favourite part of the novel, as well as the descriptions of food and sweets. I could really feel the freedom and the sense of paradise, the lazy, slow way of life, that might seem boring to some, but it’s perfectly enough for Theo. And yet, this book really wasn’t what I expected based on the blurb.

First, let me talk about our protagonist, Theo. I loved that she defined herself as queer because her identity is complicated – she mostly likes women, but she’s not against maybe being with men, and she keeps a metaphorical little gate open for one man in particular, which is eventually explored in the book.

Despite this, I found Theo an incredibly unlikeable character at first. Her personality seemed to consist of butting into everyone else’s business, and trying to influence their lives in a very invasive way. Now, an unlikeable protagonist in itself is not a problem, but in a romance, it makes it pretty difficult to root for her. Since the blurb mentioned that Theo’s meddling will eventually get her in trouble, I was waiting for the inevitable character development. I also liked that her behaviour was continuously called out, mostly by Kini but also sometimes by other characters. Although after a certain event Theo realises she messed up and genuinely tries to make up for it, I still caught her saying or doing things that made me cringe even towards the end. There was definitely some character development, but sometimes it felt like as soon as she took a step forward, she took at least a half back.

Still, what really surprised and even frustrated me wasn’t Theo’s character. It’s the fact that the whole “Theo realises she’s in love with someone just as that someone is about to get together with someone else” only happens towards the very end of the book, and it felt like it was solved really quickly. More than that, the last section of the book feels like a series of plot twists and revelations thrown together without time to really resolve any of them. When I finished the book, there were several plots with side characters that either came out of nowhere, or weren’t resolved properly, and just left me with many questions.

In the end, I enjoyed this book (or at least most of it, before the rushed ending) but not for the reasons I expected. I loved the interactions between the side characters, Theo’s friendships, her character development even if I felt it was lacking, the plot twists that surprised me (the one that made sense, at least), and the island scenery. But this wasn’t the book I expected based on the blurb, and what I expected to be the central conflict was pretty much one confession resolved in one chapter, so I couldn’t help but feel a little cheated.