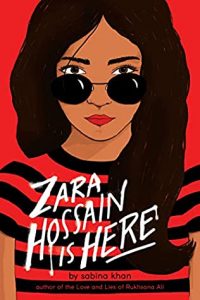 Zara Hossain is Here surprised me. This is a short book, and it’s written in a way that feels pared down to the essentials. When the story begins, Zara is experiencing Islamophobic harassment from the star football player at school, but she has a strong network and friends and family that supports her. This harassment escalates, though, and it takes the story in a darker and more complicated direction than I was expecting.

Zara’s family has been living in Corpus Christi for 14 years after emigrating from Pakistan. They’re still waiting for their green card application to go through, though, which has put them all in stasis for many years. Zara is graduating this year, but she can’t apply to universities until she has permanent resident status, at least not without racking up insurmountable international student tuition fees. She’s also the only Muslim going to a mostly-Catholic school, which means facing bullying, especially when her friends can’t be by her side. She tries to keep her head down and avoid drawing attention to herself.

In Social Justice club, though, she can use her voice and be her authentic self: progressive, Muslim, and proudly bisexual. (And yes, she uses the word “bisexual”! She’s also out to her supportive parents.) The club is run by a queer teacher who Zara idolizes (and has a crush on), and it’s also there that she meets Chloe, a white lesbian from a strict Catholic family looking for a place she can fit in. They quickly hit it off, and between protests, they flirt and start dating. I appreciated that they discuss a little bit about navigating white privilege in interracial relationships: Chloe is supportive, but she that doesn’t mean she immediately understands what it’s like to live as a person of color in the U.S., and she does have to learn and adapt.

Do be prepared to get hungry reading this: there is much more food on the page than I was expecting–mostly Pakistani meals. Get ready to either spend some takeout cash or try some new recipes, because there are so many dishes lovingly described that made me want to put down the book and pick up a fork.

It’s difficult to discuss this story without some mild spoilers, because an event about halfway through the book is what the entire plot hinges on. It’s also something I think you should be prepared for before reading. So I’m going to give a mild spoiler warning for the rest of the review.

Zara continues to be harassed at school by Tyler, which escalates to slurs painted on her locker, his suspension, and finally, Tyler and his friends spray-painting a racist message on their home. Zara’s mild-mannered father catches him and goes to Tyler’s father’s house to confront him, while Zara and her mother beg him to wait until morning. There, Tyler’s father shoots him, claiming self-defence and charging him with trespassing.

I wanted to mention the specifics because although the book begins with racist harassment, it’s not immediately obvious that it will involve a racist hate crime or gun violence. From that point on, Zara and her family are wholly concentrated on her father’s recovery–he is in a medically-induced coma. To make matters even worse, if he is charged with trespassing, it could jeopardize their green card status.

The rest of the story focuses on immigration and the sometimes unfathomable hurdles immigrants have to face. Zara is horrified to realize that there’s a chance that her family won’t be able to stay in the U.S. because her father was charged with trespassing–despite the fact that he was the victim of a possibly fatal hate crime. She also learns that although green card applications regularly take more than 8 years to complete, there are no protections for children who age out before their applications are finished.

Meanwhile, her mother (understandably) does not feel that her family is safe in this country anymore. Even if Zara’s father has a complete recovery, what’s preventing another racist with a gun from doing this again? She requires constant check-ins from Zara and panics when she doesn’t receive a text when Zara gets to the library. She moved her for a better life, but she no longer believes that it is.

Meanwhile, Zara is completely unmoored. The idea of either being forced or choosing to move back to Pakistan, a place she hasn’t lived since she was 3, is hard to even consider. There’s also the fact that she would be forced back into the closet, and that she might not be able to marry who she loves. That’s not even taking into account leaving her home, her friends, her family, her girlfriend… She wants somewhere that she can be her whole self in safety: a queer Muslim Pakistani woman.

I appreciated the complexity that this story brought to the subject of immigration. It discusses the wait time and challenges to completing the application process, but also the luck involved. This chance encounter could erase all her family’s years of being ideal citizens, including her father’s work as a beloved pediatrician. An author’s note explains the author’s own family’s immigration process was derailed by a clerical error, making all of their work null and void. Added to that is the layer of Zara’s family wondering: is this worth it? Do I want to be in a country where so many people don’t want me here? Even if most of the people they encounter are supportive, it just takes one armed racist or one well-connected bigot to dismantle their lives.

This is a book that doesn’t provide any easy answers. It acknowledges that these are thorny, deeply flawed choices to have to make. Zara wants to stay and fight to make things better, but her mother is tired of fighting–and both of those are fair. This is a great addition to books that start conversations about immigration in the U.S., with the added layer of being an out queer immigrant from a country that is not accepting of queer people. I highly recommend it.