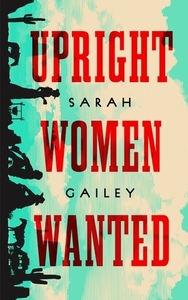 Upright Women Wanted by Sarah Gailey is a western dystopian novella set in the American Southwest at a point when almost all food, gasoline, medical supplies, and other necessities have been rationed by the army, and the only books around have to be pre-approved by the government. Normally I think novellas have a tendency to fall flat for me, but I’m very intrigued by the spat of western-themed dystopian fiction that’s been put out recently, so I wanted to give it a try.

CONTENT WARNING: The story opens with a hanging. The main character, Esther, has just watched her friend Beatriz be hanged for possessing unapproved materials, and she knows she has to get out of town before a similar fate befalls her. So she hides away with the traveling Librarians, women who travel between small towns in the Southwest distributing approved books. It’s a place for women to exist without being married, and it’s away from her small town. Although initially unhappy with her presence, the Head Librarians Bet and Leda allow her to stay and set their assistant Cye to teaching her the ropes as they continue to deliver books to towns and carry out their secret mission of helping move contraband packages and people who need to leave. As Esther learns more about what it takes to be a Librarian and about her companions, it becomes clear that the Librarians are also a home to many sorts of people that would get run out of the small towns they go through, or worse, and as Esther learns more about their true mission, she’s left with more questions about herself and what she wants to do with her life.

As the main character, it is through Esther’s viewpoint that we see the Librarians, and at first I was frustrated by what seemed to be Esther’s willful obliviousness to what was right in front of her. She had had a whole relationship with Beatriz – not just an unrequited crush – and I couldn’t understand why she refused to acknowledge what was clear about the people she had fallen in with, even when they were right in front of her. But the more Esther revealed to Cye and later Amity, a fugitive that’s moving with them, the more I realized that this was a story about the trauma of having to live in fear of who you are and the consequences of being found out. A common enough theme in LGBT literature, but the rebellious queer western pastiche this was sold to me under obscured it from me to start with, and I think it is well done here in how it unfolds and how Esther herself has to realize the full extent of her trauma and how to navigate around it, especially for a novella. As things progressed, it was less the Librarian’s hidden duties that drew me on, but instead Esther’s progression of grappling with her past, present, and future.

I also thought it was interesting that Bet and Leda are present as queer elders, but it isn’t them that are Esther’s main mentors in coming into herself. Cye may mock her at first, but it is them and the outlaw Amity that end up helping Esther the most. Amity was also an interesting character to me, as an outlaw with competing streaks of deep pragmatism and compassion. I thought it was really interesting who here was most helpful to Esther and who had broader concerns than one timid girl.

As in all frontier or wilderness survival stories, I was super interested in the segments about Esther gaining the skills she needed to survive. Not only were there the expected segments about learning how to ride a horse or shoot a gun, there was a delightful segment where Esther tries her hand at learning bookbinding. What I found charming about Esther was that, even laboring under her own personal trauma and confusion, she tried hard to learn or do the practical things that life in the southwest on the road demanded.

In conclusion, Upright Women Wanted is an interesting and entertaining novella, and worth your time if you’re interested in westerns. In my opinion it succeeds better than a lot of novellas do at fleshing out interesting characters within a condensed plot, and it hits the grim but somewhat hopeful dystopia notes without hammering them too hard.