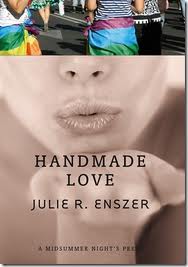 Back in January, I read another collection of Julie R. Enszer’s poetry: Sisterhood. I found that little poetry book so powerful that I was eager to pick up another collection of Enszer’s work. Unfortunately, I didn’t enjoy it as much. Sisterhood had several poems (one especially) that hit me so hard that I re-read them over and over, and kept thinking about them for days. I even found myself reading bits out loud to my roommate. Handmade Love has the same poetry style for the most part, but I didn’t read any poems that had such an impact on me as the first collection.

That might have to do with where I am in my life, though. While Sisterhood obviously was themed a lot around sisters, Handmade Love is more concerned with aging and marriage. Reading these poems at the ripe old age of 23, I’m probably not the best audience. I did have other issues on top of this, though. One was that I found more poems in this collection to be distractingly rhyme-y, which is just my personal preference in poetry. Also there’s a footnote that leads to nothing! Which is another pet peeve.

But more importantly, there’s also transphobia in one poem: “Terms of Endearment”: “Then I learned you consider / yourself to be male–transgendered. … Immediately, I’ve like to say “FTM tr***ie” and cast / upon you my feminine wiles, but can I?” For one thing, trans men do not “consider themselves” to be male, they are. “Transgendered” is also not the preferred term: it’s “transgender”. And then there’s the slur. This poem, I think, is trying to be pro-trans, but it’s coming from an extremely cissexist place that made me wince to read. Especially from a book that is described on the back cover as “delight[ing] in the lives of gay, lesbian, bisexual, and transgender people”, this is disappointing. Another poem a few pages later, “Through the Flower”, discusses Judy Chicago’s paintings, and says “Chicago captures/the locus of our strength and power; locates it between our legs”, which seems to equate women with vaginas. It made wonder whether we can celebrate vulvas (which have been demeaned in mainstream media, because of their association with women) without being cissexist.

It isn’t all negative. There were still poems that I found thought-provoking, like “Hibiscus”, which describes seeing a flower so large that she wanted to climb inside it, and then follows with “At rest, this seen takes root: / I know why men hate women.” My favourite poem is probably “Was Elizabeth Bishop a Lesbian?” which begins

The first time I heard this question
the words came from my lips
posed to the professor in the too-hot
classroom of an ivy-covered,
though thoroughly Midwestern, hall;
he looked at my and sighed,
Such things are not relevant to poetry.
What matters is she was a master–
one of the greats of our century.

I think a lot of queer people (and other marginalized groups, too) can relate to having their identities and histories brushed off as irrelevant. She goes on to describe attempting to answer this question for a decade after this. I did also like the excerpt that is also included on the back cover:

I believe that there are two kinds of love in this world:

inherited and handmade. Yes, we inherit love
but my people, my people make love by hand.

This is such a concise and beautiful idea, of queer love being made by hand; having to be sought and deliberately created, not just inherited.

There are definitely some great poems in here, but the cissexism tipped this collection to just okay. If you’re going to pick up Enszer’s poetry, I would definitely recommend Sisterhood more.