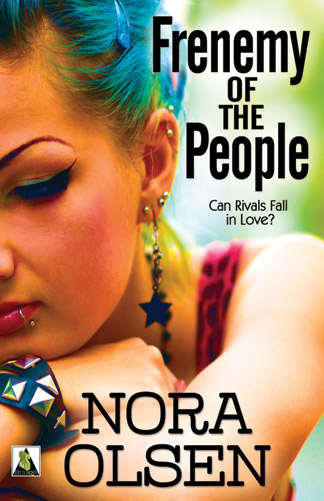 This is the third Nora Olsen book I’ve read, after Swans & Klons and The End. Both of those I felt had great premises and some strong elements, but they fell a little short of my expectations. Frenemy of the People is a different genre (contemporary) than those, and I had heard good things about it from the Bisexual Books tumblr, so I was cautiously optimistic going into it. Bisexual Books said that it was like The Difference Between You and Me by Madeleine George, which I enjoyed for the most part, but without the biphobia. I can understand the comparison. These two books have very similar storylines: popular bisexual girl and outsider activist lesbian navigate between being rivals and love interests. Unfortunately, I didn’t find the story nearly as compelling as The Difference Between You and Me.

For one thing, I thought the main characters were absolutely insufferable, Lexie (the activist) especially. Both of them say offensive things, including Lexie using the slur “r******d”, though she’s called out on it and apologizes. She also says some pretty biphobic stuff. It may be realistic that there are teenagers that act as irritating and superior as these two do, but they definitely felt like the least likable characters I’ve read in a long time. On top of this, the writing feels weak, and the dialogue clumsy at times. [spoilers] There was also one part, when Lexie and Clarissa have just started going out, when Clarissa finds out her horse has been sold and that Lexie’s parents bought her a horse. Obviously, it’s the same horse. Realistically, this is an awesome coincidence. Now you can go ride your old horse whenever you want! But no, instead Clarissa blows up at Lexie (even though she had nothing to do with it) and they break up. It was such unnecessary drama for the sake of it. [end of spoilers] A lot of the plot also revolves around mortgages, and the explanations got a little over-the-top at times for this young adult novel.

There are some strong moments, though. Desi, Clarissa’s sister with Down’s syndrome, was probably my favourite character in the book. She’s a well-rounded character, and I liked how she used people’s misconceptions of her to her advantage. One of my favourite lines of the book was when she convinces the pizza place to have a Desi for Queen special. When Lexie calls this strategy brilliant, Desi responds with “That’s why I should [spoilers] drive the bulldozer. Brains, beauty, and pizza.” The subplots to Frenemy of the State and side characters seem to be stronger than the central ones. There were minor characters that seemed intriguing, and details that worked very well (like Lexie being passionate about butterflies, to the point that she performs “surgery” on injured butterflies so they can fly properly). I found that with Nora Olsen’s other books as well: the things in the background seemed to be working well, but the main storyline didn’t.

I did like the ending, however. It was definitely not what I was expecting. And I found that Clarissa and Lexie’s irritating qualities definitely lessened as the book went on. They did improve each other. After reading three of Nora Olsen’s books, though, I think have to accept that this is not the author for me.