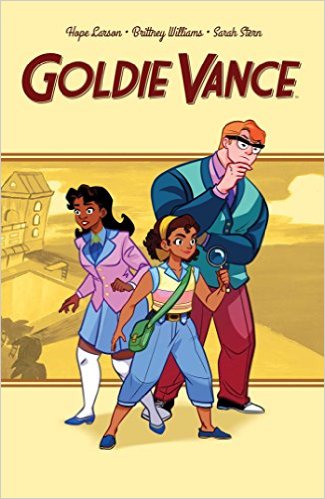 Aahh, it’s been a long time since I’ve read a book with surprise queer content. It’s such a great surprise.

Goldie Vance is an all-ages comic that has been described as Lumberjanes meets Nancy Drew, which I think is a pretty solid assessment. It also gave me hints of Veronia Mars, but that may just be because I haven’t been exposed to many girl detective characters. Goldie works at a hotel with her father, but she also attempts to act as a detective on the side.

For some reason, I kept being surprised that the main character of this is a teenager. I shouldn’t have been: she acts as a valet, so she’s clearly old enough to drive. I think it’s because teenagers are usually drawn in comics as if they were twenty-somethings, so I assumed that this teenager was a preteen.

I really love the art in this volume. The colours are vibrant, and the character designs are distinctive and engaging, and the cast is diverse. The plot lost me a for a little while, just because I was expecting it to be aimed at a younger audience and wasn’t thinking about it having any sort of political aspect.

But, of course, what stuck with me was the queer content. This is an all-ages comic with a girl who likes girls at the centre of it! She meets Diane and is immediately enamored with this girl rocking the James Dean look. It’s not subtextual. It’s not treated any differently than any other romance in the text. But I’m so unused to queer characters in a book for young people that I could hardly believe what I was reading. Was I wearing queer goggles? Was I projecting?

I’m so glad that with comics like this and Lumberjanes, and with shows like Steven Universe, we’re getting queer representation in kids’ media, too. It’s so important, both for queer kids and for making society in general more accepting. This is a really fun comic, and it would make a great gift for fans of Lumberjanes and similar comics.