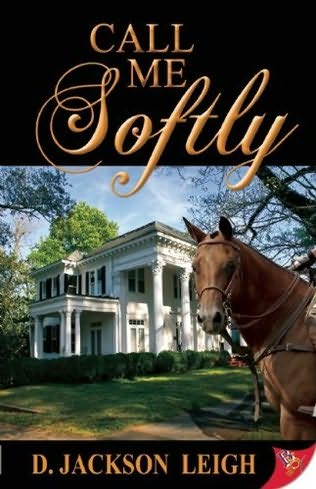 I’ve got to tell you, I am perhaps unreasonably impressed by this book. I’ve been reading a lot of self-published lesbian fiction, and I’m sorry to say that that often lowers the bar.

Besides, Call Me Softly even corrects some common published lesfic annoyances, in that it has a plot unrelated to the romance. A plot! There is mystery and suspense and murder and family secrets and horses! I mean, there are actual things happening other than girl meets girl, girls fall in love with each other, girl inadvertently screws it up with girl (usually due to a tragic misunderstanding), and girls eventually get together after all. Other things! So, if you are not as easily impressed by these things, I’m not sure how you’ll feel about it.

Oh, and also, the writing doesn’t distract from the story! Okay, well, I have to admit that the sex scene writing seemed a little odd, and in places awkward to the point of being unbelievable (the dialogue, especially), but that was the only place I had a problem with it.

Did I mention horses? See the horse on the cover? They feature prominently in the novel. If you went through a horse phase growing up (or still love them now!), this will probably be a plus. Even if you don’t have a particular interest in horses (like me), however, I don’t think you’ll find it distracting. Unless maybe you’re not an animal person at all.

Usually I avoid mysteries because I’m so terrible at picking up on clues that I feel completely lost by the end, but in this one I could see one of the big reveals coming. Again, I don’t think it really detracts from the novel, but you most likely won’t have to think too hard about the mystery aspect, especially if you’re an experienced mystery reader.

The ending seemed to be rather sudden and dramatic, but in retrospect I’m not sure how else it could have been done. I would have preferred, however, and epilogue or something to get back to the slower pace the rest of the novel has, but that’s a very minor point.

This review is a bit all over the place, but overall I think this definitely an above-average lesbian romance and I would recommend it to anyone who’s looking for a little more interest in their lesfic.

Check out MFred’s review for more info about the plot and characters (and let’s face it, a little more cohesive of a review).