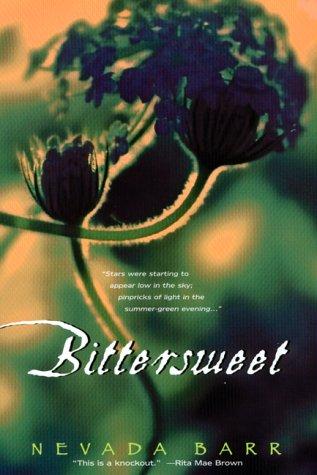 The back copy of Nevada Barr’s Bittersweet promised me a truthful, accurate portrayal of two women living together in the 1800s West.  Imogene, a spinster teacher, is forced from her job in the East when her secret affair with a female student is revealed.  She ends up in small Pennsylvania farming town, where she starts a friendship with Sarah Mary.  However, malicious gossip eventually finds her again, and Imogene and Sarah are chased out to Nevada, where they try to start again.

The book is equally Imogene and Sarah’s stories, which I found difficult.  Imogene is older, more experienced, and to me, much more interesting.  She is described as exceedingly tall and strong for a woman – so not only is she old, single, over-educated, but she also physically embodies the characteristics of spinsterhood.  Barr is not an explicit writer – the queerness of Imogene’s character is implied more than it is spelled out.  I wanted more of her, her inner feelings and struggles, than I got.

Sarah, on the other hand, is introduced as a child.  When she reaches around 15, she is married to a local neighbor.  Her life is difficult and hard; she is immature in both age and experience.  Her friendship with Imogene, I think, has more to do with Imogene’s loneliness than with a lot of commonality of character.  It takes Sarah quite a long time, in both page numbers and in plot, to become an interesting character.  Most of the time, I felt that Sarah was just a victim for Imogene to protect, not a true partner.

Without being too spoilery, here is Sarah trying to decide her future:

She squeezed her eyes shut and willed the words to heaven.  When she opened them she was alone and small under the ring of mountains, the little grave at her feet.  “If not, Lord, I’m going to cast my lot with love.”  The defiance returned and she added, “Half a year. I’ll listen half a year.” (198).

I think Bittersweet runs a bit slow and overly long, but Nevada Barr is a gifted writer.  The Old West comes alive, without cliche, in her writing.  Where Barr succeeds is in telling the lives of women– mothers, daughters, wives, and spinsters.  I found it fascinating and interesting, even when the story slowed down.