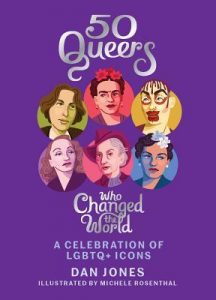 When I originally saw this small, colorful book, I briefly wondered if it was a children’s book. The format is about the same as Good Night Stories for Rebel Girls: one beautiful illustration, plus a one page bio. I quickly realized my mistake when I read the biographies, which includes describing someone as jumping crotch-first into the queer scene. This is a “Gift” book, or a small coffee table book. Something to flip through, not necessarily to read cover-to-cover.

I have mixed feelings about this book. The portraits are gorgeous–and in fact, they predate the book. Michele Rosenthal’s Queer Portraits in History project inspired this book (in that they are the book, with bios to pad it out). Generally I did like the style of writing, which was playful.  There seemed to be a good mix of people included. I didn’t count them, but it wasn’t obviously mostly white men, though there are definitely more white people and more gay & lesbian people represented than people of color or bi and trans people, but I think that’s expected when talking about the history of the queer community. There were inclusions of people I hadn’t heard about before, but I appreciated learning about. Like Ron Woodroof, who was diagnosed with HIV in the 80s, and in response to the FDA dragging their feet about addressing the HIV/AIDS crisis, started a smuggling ring of HIV/AIDS drugs proven effective in other countries. He crossed the Mexico border hundreds of times in disguises to bring life-saving drugs into the US.

Unfortunately, there are some downsides. Despite being named “50 Queers Who Changed the World” (a controversial title, I know, but one I love), the intro says that you don’t have to be queer to be a queer hero. Sure, but you do have to be queer to be part of the group “50 Queers,” right? Luckily, there aren’t a lot of allies included (mostly just Madonna). There are, however, queer figures that are controversial in other ways. Like Dan Savage, who has been called out in the past for saying anti-bi, anti-trans, fat-shaming, and other hurtful things. Some of the people included are (or were) hateful towards other LGBTQ groups, or even their own. Some of the time this is mentioned, sometimes not. I can understand including those people if they have had a big impact, but I do think it’s worth disclosing. They also use the term “Aids” instead of “AIDS,” which was an odd choice.

Worse than those, though, is the constant misgendering of trans people. Any time that the book is talking about a person before they came out, it uses the wrong pronouns. Deadnames are used copiously, sometimes even seeming shoehorned in when completely irrelevant to the sentence.

I definitely recommend checking out the original Queer Portraits in History project and googling any person you’re not familiar with, but I don’t think I can recommend this book. With some slight changes, this would be a delightful little gift book to have in some queer waiting room, but not with the misgendering and other issues that are present.