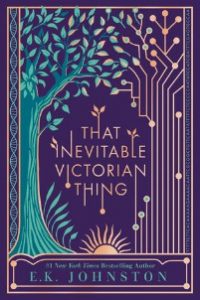 Let me start this review at the end: The Author’s Note, which cleared up some things that I had been  arguing with myself about the entire time I read reading it:

That Inevitable Victorian Thing is a smallish story that takes place in a very big world. I wanted to be sure to include that world, not the least because in real life, Victorian England was kind of the worst. It would be unfair to paint it over with a glossy sheen, undoing all the colonial wrongs, in the name of Alternate History. To that end, I attempted to make everything slightly better than it was in real life. Throughout history, there are always people who say “What if we did this instead?” before those in power do something awful. They are almost always ignored, but in my made-up world, those people were listened to.

Basically, this is a book that is set in a world where the British Empire went very differently. Queen Victoria married off her children to people around the world, ensuring that the whole royal line is mixed race. Indigenous nations are recognized. The U.S. as it is today is three different countries in this world: the U.S. (Northern states which are… not doing well), the South (an independent nation of mostly former slaves, who are doing quite well), and Mexico. And that’s just scratching the surface. The Victorian Era has stretched on, because it is adaptive. The Church is made up of many different beliefs. The empire is not anti-gay. But it’s also not perfect. You can’t make colonialism a good thing. And I was worried that this alternate version was trying to present this shiny, happier, multicultural version of colonialism. But the author’s note put me more at ease, and there are moments when characters mention the horror that is the history of the empire (colonizing North America and the slave revolts in Haiti in particular).

You may have noticed that I’m well into this review and haven’t mentioned the main characters. Well, that’s because the setting does loom larger than the plot or characters in this case. This is an interesting world, and we’re clearly only seeing snippets of it. It’s not that I didn’t like the characters or the plot, but I kept coming back to thinking about the world and its implications. There are three main characters: Margaret, the princess and next in line for the crown. She wants to experience life outside of the royal bubble, so she’s in disguise for the summer, to try to get a taste of what her life would be if she wasn’t a princess. Helena is a very practical character who has her life completely planned, and is reluctantly drawn into a celebrity/royal party (where she meets Margaret). And August, who… I was not as interested in. He wants to run his dad’s lumber company, and everyone expects Helena and August to get engaged any minute now.

The Helena/Margaret romance is sweet, but I wasn’t particularly invested, and August never piqued my interest. The plot mostly involves these three characters’ collective emotional lives getting more and more tangled. (Spoiler) Helena finds out she’s intersex, which is its own subplot, but isn’t dealt with in a lot of depth. I’d be interested about what an intersex reviewer thought about this story line.

One other point I kept getting caught on is that in this world, people enter their genetic make up into a computer, and it connects them with good “genetic matches.” This is optional, and it seems to encourage people to match with other ethnicities? But although this may not be discriminating by race, isn’t this inherently a form of eugenics? What make a good genetic match? Is it trying to screen out the possibility of having children with disabilities? The whole thing made me uneasy, and it’s only really addressed as being a ‘limited tool’–useful, but not able to make matches based on love.

As you can probably tell by this scattered mess of a review, this book left me with a lot to think about. I imagine that I didn’t enjoy it as much because my philosophical brain latched so hard on to these two ideas (is this supposed to be nonracist colonialism? eugenics by dating app?) that all I could see was what connected to those. Browsing the Goodreads reviews, I can see plenty of people really liked it, but personally, I was too up in my head to really connect with the characters enough to properly enjoy it.