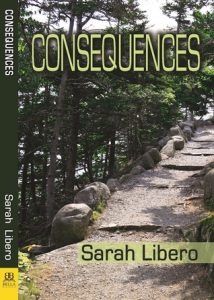 When Emily, a systems analyst, meets Kay, a detective, at their Maine police station, both feel an instant connection: Emily is all too happy to provide her expertise on Kay’s investigation of a drug gang, and she begins questioning her twenty-five-year marriage to her husband, Tom. Then when Tom is killed in a suspicious car accident, Kay takes the case–and her relationship with Emily deepens. As they untangle a complex web of crimes, the two become more and more entangled in each other’s lives. Consequences is a fast-paced romance, with plenty of external cop drama to keep things moving.

Emily and Kay are perfectly likable characters–but their characteristics and character development seems to take a backseat to the novel’s intricate plot twists, and Consequences suffers somewhat for that. For example, the novel opens with Emily getting attacked and sexually assaulted by a stranger, decades prior to the novel’s main events. Ostensibly this prelude serves to explain why she married Tom, instead of pursuing her nascent attraction to women (she states later in the novel that she married him because he helped her feel safe after the attack), but the event’s inclusion and explicitness feel weird and out of place, because it operates as a graphic plot point rather than a traumatic event that Emily works through and that contributes to her character development in some way.

*spoilers in this paragraph* I half expected Emily’s attacker to be somehow involved in the drug-smuggling ring, because everything else in the novel seems to tie back to this investigation, and every other issue in the novel is neatly tied up with a bow when this case is solved. It turns out that Tom was run off the road by one of the drug dealers in the ring, because he had found out about their illegal activities and had incriminating pictures on his phone. And even minor plot points end up leading back to the drug gang: it turns out that the worst player on the station’s poorly-ranked softball team is a crooked cop who was messing with evidence on behalf of the criminals–so with him gone, the team will be on the up and up! It all seemed a little too convenient for each and every obstacle faced by the characters to connect back to the drug investigation. *end spoilers*

Despite all the plot’s dramatic twists, turns, and reveals, I did find myself rooting for Emily and Kay. Their romance had great chemistry–and their first sex scene showcases some pretty great modeling of consent. Read Consequences if you like your romances with a heaping helping of mystery and suspense.