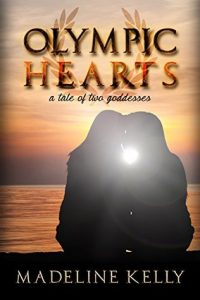 “As a goddess of love, it’s not my way to stay chaste”

“Olympic Hearts” is a short story by Madeline Kelly. Once I realized what it was about, I started reading it immediately because it combined my loves of reading about mythology and queer women. It helped that it was short, and although I wish I had the time to read more, sadly I don’t. This short story is around 30 pages long!

That said, while the story is cute, it may not be for everyone. This is Madeline Kelly’s first published work and her passion does show in the writing but some elements were used that I was not convinced about. One such element was the use of modern language and phrases, such as “buddy” or “colour me unimpressed”  that to me, did not seem to resonate with the time that was being written about. I like to immerse myself in the world that is being written about and it’s a pet peeve of mine when languages does not fit with the story.

What I liked about the story is that it portrayed the gods like the mythology make them out to be: not perfect. Indeed, they have many faults and most of the problems were due to these faults.

For being short, the story does have a mild twist towards the end.

The concept of this story is good and I wish to see more similar stories, perhaps going into more depth and longer (let’s hope I will eventually have enough time to read them). People that don’t suffer from my same pet peeve and don’t mind non-same-gender non-explicit content, should give this story a go. We should support new writers so they cultivate their talent and we, as readers, should read different authors to find our styles and perhaps be surprised by liking something different.