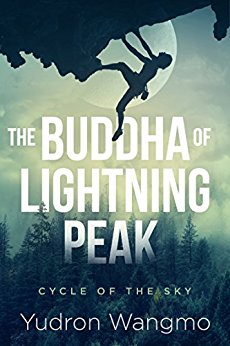 Within a few chapters of starting The Buddha of Lightning Peak, I thought I understood where the story was going: Plucky teenager takes on corporation to save the environment! Having been environmentally-focused as a teenager, this was a plot that would have been just fine by me. By the midway point of the book, however, it was obvious this wouldn’t be the Disney Channel version of that narrative.

Dee is a black lesbian teenager with a lot on her plate. Her brother is in jail, her grandmother is abusive, and the place that she feels most at peace is scheduled to be bulldozed. Dee is determined to save Lightning Peak, but no one else seems to care–not even the environmental groups that would usually be the leading the fight. She doesn’t always feel like the different parts in her life meld, but she will have to draw on her family, her friends in the Gay-Straight Alliance, and the connections she’s made through a Buddhist meditation group in order to fight back. Even if that means risking her life.

As you might be able to tell, there’s a lot going on in The Buddha On Lightning Peak. On one level it can be read as a young adult environmental thriller about an activist taking on a suspiciously powerful mining company, but that ignores both the scope of the plot and the other aspects of Dee’s life. She’s also becoming serious about pursuing Buddhism as a life path and trying to incorporate that into her identity (there aren’t a lot of other black Buddhists that she knows, nevermind black Buddhist lesbian teenagers). She’s feuding with her ex, attempting to maintain a relationship with her incarcerated brother, and struggling to maintain her friendships at the same time. There is a huge cast of side characters in this book as well. Though I sometimes felt overwhelmed by the amount of names (a personal flaw of mine), I did appreciate how many side characters became well-developed over the course of the novel.

Dee is an engaging protagonist, but she’s not perfect. She is impatient and often angry, even when dealing with her closest friends. While continuing to fight a seemingly unwinnable battle to save Lightning Peak, Dee also begins, possibly unconsciously, to come to terms with her own more generalized anger. She draws on the lessons she’s learned from her Buddhist mentor in order to have more empathy and understanding for the people around her, and see things more broadly.

This definitely became more complex and had higher stakes than I was expecting. Dee becomes involved in something much bigger than she anticipated, and soon seems to be regularly putting her life at risk for her goals, which definitely kept me flipping pages.

This isn’t a perfect book, however. The major problem I had with it was the use of slang, which often felt dated and awkward to me (“Kicking it at a party”, “check it”, etc). The book is from Dee’s point of view, so it’s not just her dialogue that uses slang, but the entire narration. Even when it didn’t seem dated, seeing words like shoulda, mighta, or ’em in the narration would often throw me out of the story.  There is a lot to do with race and racism covered in this story as well, which I can’t speak to in terms of representation: I’m white, and the book is not own voices. I’d be interested to read a review by a black reader, especially a queer black reader.

I also am not Buddhist, so I also don’t have a lot of context for its representation here, but the author is a Buddhist practitioner. I got the impression that at the core of this series of books was to the representation of Buddhism, but although it was a major part of the story, it didn’t feel pedantic or preaching to me.

Despite my issues with the narration, I really enjoyed both the well-rounded characters and the nerve-wracking plot of this. Not only was there a lot of action, but events kept surprising me (mostly because everything seemed to keep going wrong). If you want a more intense take on the “plucky teen takes on evil corporation” plot, with added Buddhist subplot, I’d recommend giving this one a try.