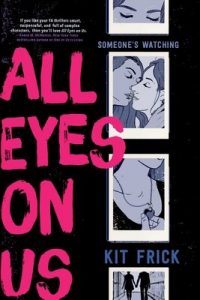 All Eyes On Us, the 2019 release from author Kit Frick, is the story of two teenaged girls, both desperate to hold onto their secrets and their dreams, even if it means teaming up to take down their mutual enemy. It’s fast-paced and twisty, but not without its faults.

Amanda Kelly has known she would marry Carter Shaw for pretty much as long as she can remember. It’s one of those things that’s simply part of who she is. No one has ever asked her if it’s what she wants, and though a piece of Amanda struggles with the expectations her parents have placed on her, she’s pretty sure she loves Carter and is ready to get married as soon as they’re both done with school. Sure, Carter’s not perfect. He’s cheated on her a time or two, but Amanda’s sure they can get past his indiscretions. After all, isn’t that what true love is all about?

Rosalie Bell wants nothing more than to keep her head down until she turns eighteen. Once she’s a legal adult, she can leave her ultra-conservative parents behind and finally fully embrace her identity as a lesbian. As it is, she has a secret girlfriend and a fake relationship with the super popular Carter Shaw, the kind of boy her parents have always wanted her to spend time with. Carter’s  nice enough, but Rosalie just isn’t into him that way, but she knows she has to keep pretending to be straight if she wants to have a chance at living life on her own terms.

Amanda and Rosalie don’t really know each other, although each is all too aware of the other’s existence. Amanda wishes Rosalie would relinquish whatever hold she seems to have on Carter, and Rosalie feels a mixture of guilt and envy whenever she thinks of Amanda. But when both girls start receiving disturbing text messages from a blocked number, they realize someone out there knows each of their secrets and is ready to make them known to the world if Amanda and Rosalie don’t follow instructions. Now, these two must team up if they hope to come out of this unscathed, but how can they hope to work together with so much unspoken angst between them?

Rosalie’s character is the best thing about this book. I could feel her inner conflict whenever the story was told from her perspective. She doesn’t enjoy using Carter as her fake boyfriend, but her parents’ religious beliefs pose a real danger to her if she admits she’s attracted to girls. It’s a tough situation, one I don’t see in many books these days, and I applaud the author for bringing it to life on the page in a way that feels so relatable and authentic.

Amanda turned out to be a harder character for me to like. She’s super privileged, and while this in and of itself isn’t a bad thing, her thoughts and beliefs were sometimes hard for me to swallow. There’s a sense of entitlement about her that drove me nuts at times. Her life definitely isn’t perfect, but her problems felt insignificant when compared to the things Rosalie is constantly going through. I wanted her to wake up and take a good look at reality rather than just whining about how hard things were for her.

There is quite a bit of homophobic rhetoric here, most of which comes from Rosalie’s parents and their religious leaders. While this gave me a deeper understanding of the peril Rosalie would be in if those around her discovered her sexual orientation, it could prove difficult for some readers to deal with.

All Eyes On Us is the first novel I’ve read by Kit Frick, and although I didn’t love everything about it, I’m intrigued enough to check out more of the author’s work. She definitely knows how to create a compulsively readable thriller, and I’m always on the lookout for those, especially when they feature characters who are bisexual or lesbian.