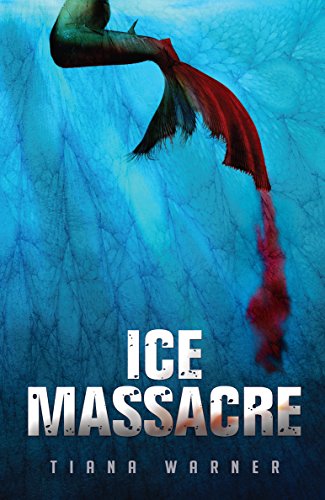 Why did no one tell me about this book earlier?? Honestly, this should be much more well known. Ice Massacre is about Meela, and 18-year-old girl who has been trained to fight killer mermaids. She’s needed to defend her island, but she has qualms about being sent out to massacre the “sea demons”: she befriended one as a kid.

I was completely sucked in by this book. I can’t help but make Hunger Games comparisons: this is a story about teenagers at war, and it has some brutal violence. Each girl reacts to being in a war situation differently, some numbing themselves with drugs and others becoming vicious and unfeeling. Meela struggles to steel herself to the killing of mermaids–creatures who look eerily human–and it’s made worse by the fear that the next one she kills will be her childhood best friend.

In addition to the war with the mermaids, the girls turn on each other on the ship, splintering their ranks. The tension is high, and I ended up reading this book in a day, which is not a common occurrence for me.

The queer content of this book is understated, and it could easily be missed by someone who wasn’t looking for it, but it’s impossible to misinterpret by the end. If you’re someone who wants to get queer books in the hands of people who might not seek them out–or who aren’t able to openly read queer lit–this would make a great choice.

Ice Massacre also has a mostly indigenous cast of characters, but they are a fictional indigenous group. In the book, Eriana Kwai island seems to be an independent indigenous nation between BC and Alaska. The language is loosely based on Haida. I can’t speak to this representation, especially because the author did invent an indigenous group. I would be very interested to read a review from an indigenous reader, especially someone from the Pacific Northwest Coast.

With that caveat, I highly recommend Ice Massacre, as long as you can stomach some violence. Killer mermaids! It’s like Fox and the Hound, but with mermaids and lesbians! This deserves a much more prominent spot in queer YA and queer SFF.