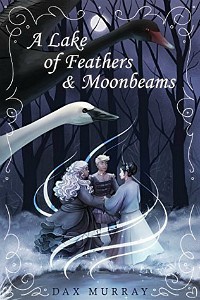 A Lake of Feathers and Moonbeams is a queer Swan Lake retelling, and honestly, it just had to live up to that premise to win me over. I may not be incredibly familiar with the ballet, but I grew up watching Swan Princess constantly. Besides, queer fairy tale(-esque) retellings are one of my favourite things to read. Add to that the beautiful cover and the promise of a positive polyamorous relationship, and I was sold. So I was impressed to find that not only did this satisfy those queer fairy tale cravings, it went beyond that to create an engaging and emotionally compelling story in its own right.

When I think of a queer retelling, I expect it to stick pretty closely to the original, just massaged to include queer characters. A Lake of Feathers and Moonbeams shifts the narrative dramatically, however, changing not just the trappings of the story, but the heart of it. Katya, the main character (though there are multiple POV characters), doesn’t exist in the original story. At least, as far as I have gleaned from reading the Swan Lake Wikipedia article, she would have been an anonymous background character at best with no story line of her own. Although the central plot of Swan Lake does carry over to this retelling, the tension of the story comes from Katya’s unique position in this world.

The story alternates between two points of view. They are identified by a simple, stylized illustration at the beginning of each chapter of either a swan (Katya’s chapters) or a castle (Alexis’s). I liked this little details of the design. I’ll start with discussing the queer elements of this story, because… that’s what we’re here for, right? This is a world that is completely accepting of queer people and nonbinary genders. Princen Alexis uses they/them pronouns, and no one is fazed about having a nonbinary heir to the kingdom. In fact, when they attend a ball, they are “immediately greeted by people of all genders vying for their attention.” There are other nonbinary characters who use neopronouns, such as Larde Tanis, who goes by xie. This is own voices nonbinary representation (Dax Murphy uses fey/fem/feir prounouns in feir “About the author” blurb.)

Bisexuality seems to be the norm in this world, or at least not worth remarking on. Katya, Zhen, and Alexis’s mother all show attraction to multiple genders. Alexis’s best friend and guard, Tatiana, frequently mentions her girlfriend, Inna. Alexis’s parents are in a polyamorous triad, with their mother having two partners (the Czar and Lady Natalya). While attraction to multiple genders is unremarkable in this setting, it does seem somewhat unusual to have multiple partners (though obviously not unheard of, because there doesn’t seem to be any pushback to the leaders of the country being in a triad). Alexis’s parents talk about the difficulties and negotiation that they went through to make this a healthy relationship, but it is clearly worth the effort for all three of them, and Alexis is happy to have three parents.

As I mentioned earlier, the queer and polyamorous additions are not the most dramatic changes in this retelling. We begin with Katya, who has no memory when she bumps into Ivan in the forest. He helps get her acclimated, and she stays with him. She learns magic from him. Their relationship builds slowly and turns romantic. It is against this backdrop of trust (and dependence) that the rest of the story plays out. Ivan captures Zhen–Alexis’s fiancee. Their arranged marriage is meant to unite their two kingdoms. (Although this is a fairy tale world, Alexis’s country is clearly coded as Russia, and Zhen’s is coded as China.) Ivan tells Katya that Zhen is a threat to their life together, and asks her to pretend to be captive with her, in order to gain information. Katya is shaken. This is unlike Ivan. As she observes Zhen–and sneaks away to share her findings with Ivan and beg him to explain the situation–she finds herself falling for her.

It’s this tension between Katya, Ivan, and Zhen as well as the triangle between Katya, Zhen, and Alexis that form the core of the book. Katya is torn between Zhen, this new element in her life, and Ivan, the person who she loves and trusts. She wants to believe that there must be a good reason to hold Zhen prisoner, that she must be a legitimate threat, but she also struggles to find that threat in Zhen. At first, I found it difficult to believe that Zhen would be flirting with Katya while she had been kidnapped and trapped in the woods, but Zhen addresses this directly: “Yes, we are trapped. Yes, we are waiting for someone to save us. That doesn’t mean I want to dwell on the fact!”

It’s this internal struggle between Katya’s loyalty for Ivan and her growing relationship with Zhen that really fascinates me, so I do want to discuss some spoilers. I will mark where the spoilers end.

Initially, I felt that Katya was a passive character. Because she seems to appear out of nowhere as an adult, she can seems naive and inexperienced–quick to believe whoever she is speaking to at any moment. I found it especially hard to believe that she would so easily go along with Ivan’s plan for her to kill the “threats” at the palace. As the story continues, however, I think that shifts. After all, it is ambiguous how much agency she has at first: Ivan has been manipulating her from the beginning, hiding her from her origins, protecting himself by using her. He tells her “Say you will never leave me,” she immediately (involuntarily?) responds with “I will never leave you.”

Katya really has to struggle to accept that despite him being the only relationship she’s ever known, her introduction to love and belonging, he doesn’t deserve her loyalty. The extent of his manipulation is slowly revealed to both us as readers and Katya: not only did her use her in this instance, he has been draining the life from their forest and using her life force to bind Zhen to the lake. It’s despicable, and I’m tempted to question how he can both be this villain and be the person who supported her in the beginning of the book–but that’s not impossible. Abusers can seem loving and supportive when it suits them. They can even justify their actions to themselves that way. And Ivan certainly seems to think he can violate Katya and care for her at the same time: he claims “I loved you, Katya,” with “a mixture of devotion and sorrow in his eyes,” even when she knows the extent of what he has done to her.

An element I really liked was when Katya realizes that she doesn’t owe him an explanation for why she turned against him. It’s such an important moment, to realize that you can’t control someone else’s narrative. Ivan will likely always believe he was in the right. Katya could try to communicate with him, could pour her heart and soul out trying to get him to see how he violated her, how he betrayed her, but it would be a waste. He doesn’t deserve her energy.

Overall, I thought it was a satisfying conclusion. There’s enough loss and struggle to feel realistic, but it manages to be a happy ending anyway. I liked the nod to compersion: “An inkling of a feeling bubbled in Alexis, seeing Katya and Zhen happy, together, made them feel happy, too.” The novel leads us to think there is no way that Zhen, Katya, and Alexis can all three be happy with their situation, but the ending challenges that, showing that relationships can be built in many creative ways and still be fulfilling.

Now I’ll address a few bits and pieces I wasn’t able to work in to the rest of the review! I liked the magic system, which seems to hang together well, and it also introduces a type of magic that I’ve never seen in a book before: nuclear magic! It’s an interesting concept, and the scenes that depict it are striking. I did have some minor issues. I didn’t entirely understand some details of the political plot (how did the son betray the Czar, for instance?), but that’s not my strength as a reader. I’m so caught up in characters that I often miss really obvious plot points. Also, the characters don’t use any contractions in dialogue, presumable to feel more fairy tale-esque, but I found it a bit awkward and distracting. Although I only noticed a handful of typos, one error I saw repeated throughout the book were numerous comma splices (“Leave that to me, I am still Czar.” and “We need to settle this dispute, it’s been too many generations.” for instance.)

Those are some very minor complaints, however, in a story I thoroughly enjoyed. I loved the queer-positive fairy tale world, but I was pleasantly surprised to find that was only the backdrop for a subtle story about trust, betrayal, and new possibilities. I highly recommend A Lake of Feathers and Moonbeams, even if you’re not familiar with the original story!