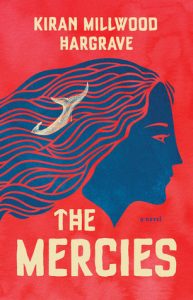 Kiran Millwood Hargrave’s novel, The Mercies (2020), is a vivid, sapphic, historical novel that I couldn’t bear to put down. I read this book in nearly one sitting and its dark, passionate story will likely have you doing the same.

Hargrave’s novel is starts in Finnmark, Norway, in 1617. It follows twenty-year-old Maren Bergensdatter as she watches a sudden storm overwhelm the male fishermen trapped on the sea. Most of the men in the village, including Maren’s brother and father, are drowned, and the women must fend for themselves in an isolated world of rock, ocean, and dangerous weather.

Three years later, when Absalom Cornet arrives, carrying with him a reputation for burning witches in Scotland and his new Norwegian wife, Ursa, tensions build in the town as Absalom sows seeds of unrest and rumours of witchcraft among the women. Was the storm a natural disaster, or the work of a curse? Meanwhile, in the lives of these independent women, Ursa encounters a new way of life, perhaps a life that involves Maren in ways neither of them ever anticipated. But Absalom sees only evil brewing in this community of women left without men to guide them, and as tensions build and violence escalates, survival becomes even more difficult.

I heard about this book because a lesbian author I follow on Twitter was reading it and couldn’t recommend it enough, so when I bought it on my ereader a few months ago, I was so excited to read it. The Mercies is a beautiful novel in terms of its wonderful poetic language that is sweeping and immersive. Some of the descriptions of the landscape are so captivating that this book really can take over your day. Hargrave’s novel is also very raw, portraying the dangerous and volatile life of this village with stunning clarity. However, it’s also incredibly dark. Based on the true story of the Vardø storm and the 1620s witch trials, the tragic violence in this book perpetrated against the women in this novel is unsettling and sometimes difficult to read, but told from Maren and Ursa’s dual perspectives, it is also a powerful story of resilience.

Maren and Ursa’s characters are two sides of the same coin—both women trapped without knowing it in a male-dominated world where their paths of marriage and family are laid out for them from birth. However, they are both pushed away from those paths and towards each other as they become alienated and isolated from those around them. Hargrave captures the chaos of suspicion and fear and the relief of finding an ally and a safe place in another person. This book was gorgeous and there really is nothing I love more than historical lesbian fiction. It’s not beautiful and glamorous, like a Sarah Waters novel, rather, it’s raw and dangerous and the peace that both women find with each other is sharply juxtaposed against an unforgiving landscape filled with dangerous accusers.

I recommend this book both for its writing and for its lesbian plot. I think my only criticism would be that it could have used a better ending, or at least one that did some of the characters more justice. Nevertheless, this novel cuts right to the heart and I couldn’t be happier that I read it.

Please visit Kiran Millwood Hargrave on Twitter or on her Website, and put The Mercies on your TBR on Goodreads. 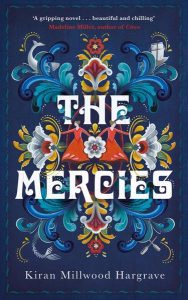 Set in 17th century Norway during a time of witch trials, The Mercies is Kiran Millwood Hargrave’s first book for adults. It was all over book Twitter earlier this year, and the more I heard, the more excited I was to read it. Beautiful cover? Check. Witches? Check. Sapphism? Check. What more could I want from a book?

When a storm kills the fishermen of Vardø – an island town in the north of Norway – its women are left behind to fend for themselves. 20-year-old Maren must learn to take care of ‘men’s work’ such as fishing and building, while grieving for her lost father, brother, and fiance.

At the same time, King Christian IV is introducing laws against witchcraft, particularly targeting the Sámi people indigenous to the north. This leads to the appointment of Scottish witch-hunter Absolom Cornet, who installs himself in Vardø along with his new wife, Ursa, disturbing the budding matriarchy and stirring up a frenzy of superstition.

I didn’t know much about the context beforehand, but Millwood Hargrave writes so immersively about the era and politics that it’s easy enough to follow along without any prior knowledge. Domestic scenes of baking bread, cleaning the household, or visiting neighbours are all crammed with historical details which bring Vardø to life. It helps that Ursa is an outsider both to the village and to domestic work, as we can learn exposition naturally through her eyes.

When Ursa realises she’s unprepared to run a household, she engages Maren to teach her the basics. What ensues is an indescribably slow-burn romance. Now, I certainly enjoy a bit of repression in my fiction, but I have to admit that after 300 pages without a single kiss I did start to grow impatient! Instead, we get chapters upon chapters of accidental hand-brushes and lingering eye contact – which are at least very beautifully and believably written.

Alongside a sapphic romance, I was also promised witches. Instead, Millwood Hargrave writes about innocent women unjustly persecuted for showing independence, defying gender roles, or simply (as is the case for Maren’s sister-in-law) being Sámi. It wasn’t what I had expected from the blurb, but it was a sobering reminder of the true history of witch trials.

The Mercies is a story about female resistance in a patriarchal society, and about the fear felt by men in power when faced with a strong woman. However, it is not a happy ending for the women of Vardø. I don’t want to include too many spoilers, but I do want to forewarn you that [Spoilers, highlight to read:] Maren and Ursa don’t get to live happily ever after, and there is a main character death at the novel’s close [End spoilers]. It’s a depressing (although probably realistic) finale.

While the book didn’t offer the ‘OMG lesbian witches’ escapism that I was hoping for when I first picked it up, it’s a well-crafted story that brings light to women’s histories and speaks to some very modern themes.