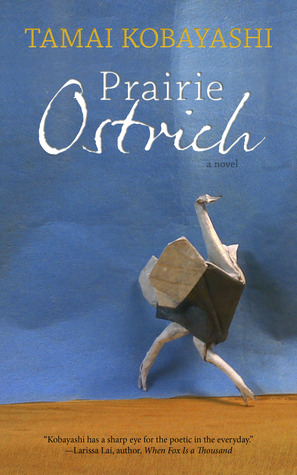 Prairie Ostrich is the story of Egg, an eight-year-old Japanese girl growing up in Alberta, Canada in the 1970s. Her brother recently died, and her family is reeling from the death. Her father stays in the ostrich barn. Her mother drinks. And her sister, Kathy, tries to take on the role of looking after Egg. Egg is desperately trying to make sense of it all, from her shattered home life to the relentless bullying at school. She clings to science, the dictionary, and stories to sort everything out.

This is a quiet, powerful story that would be best read slowly. It doesn’t have an action-packed plot; instead, it’s a character-driven story. Egg spends most of the book trying to fix things, particularly with her family. She grapples with religion, believing that maybe if she can make the right sacrifices, everything can be okay again. It’s a heart-breaking story. You can’t help but sympathize Egg, as she wonders what in her has brought in the troubles in her life. Is it the Japanese part of her that’s wrong? If she was Popular, then would everything get better? Along the way, more is slowly revealed about the people around her and their lives, but most of the novel focuses on Egg’s internal struggles.

Kathy is another powerful character in the book. She is gruff and even grumpy most of the time, but she fiercely looks out for Egg. Kathy tucks her in at night, and tells her stories, and picks her up when other people knock her down. The two sisters obviously have a very close relationship. But from the snippets of Kathy’s life that we see through Egg’s eyes, we know that she is going through her own struggles. Kathy is completing her last year of high school, and where she goes from there is up in the air. Does she leave this small town for something better? Or does she stay to take care of Egg? At the same time, the reader can tell that Kathy is obviously in a relationship with her best friend, Stacey, though Egg isn’t completely aware of this. Being in a lesbian relationship in a rural town in the 70s has its own issues, and even Egg can feel the tension.

These strong characters, and the slow unraveling of some of the underlying mysteries, drives Prairie Ostrich. The writing is interesting, almost stream-of-consciousness at times, but definitely reflecting Egg’s inner life. She sees the world as an eight-year-old does, but an eight-year-old who loves the dictionary and science textbooks, and one who often asks uncomfortable questions at Sunday school. I’d say there’s an innocence to this narrative, but her brother’s death and the fallout from it has taken a lot of that from her. I noted one passage near the end that I thought summed up the writing well:

The world does not make sense. Albert is dead, Mama is drunk, and they are the only Japanese-Canadian family on the prairie. This is not fair and fair is fair, that’s what everyone says. And now Leviticus and Romans are against them. All the world’s a jumble and Egg can’t tell up from down.

I really enjoyed the perspective and the writing style. There are several one-off lines and observations that are just gutting. As you can probably tell, this isn’t a light read. Grief permeates the novel. But it is a thought-provoking book, and one that makes you feel deeply for the people involved. I’ll admit, I cried while reading Prairie Ostrich. Egg is definitely a character that is going to stick with me. And yes, the lesbian content isn’t the focus of this book, but it is a theme that is part of the foundation of the story. (Also, Egg has her own heart-wrenching friendship, so look out for that.)

I highly recommend this book, but don’t expect to race through it. It’s a story to be absorbed slowly, letting all the subtlety of narrative sink in.