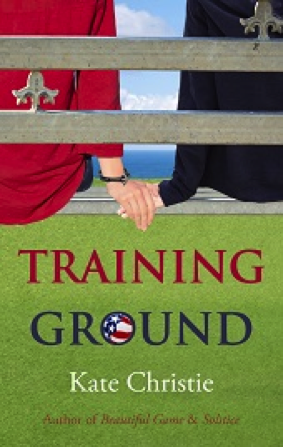 I was not, unfortunately, super into this book. Training Ground is the first book in the Girls of Summer series by Kate Christie, and to be honest, it reads more like a prequel – the whole book is just backstory for book 2. She categorises TG as a ‘contemporary lesfic with a romantic arc, but not a traditional romance’, and that seems accurate for what I know about the rest of the series, but the first book falls into YA for me – it’s about queer teenagers growing up and having messy teenage romances. Also sport.

The book follows two young girls who meet ‘by chance’ at a hotel after a soccer tournament. It’s a classic YA set-up: girl meets girl, they share a mutual attraction, one has a boyfriend and secret crushes on girls, the other has a Dark Secret. No one has ever understood Jamie/Emma like Emma/Jamie understands Jamie/Emma, and they share so many interests – including a secret love of some cooking show. Over time, they become close enough for Jamie to share the story of her trauma, and they become best friends and possibly more. They are each other’s anchors, and Emma buys Jamie a bracelet with an anchor on it to prove it.

Unfortunately, the book falls into a common YA trap: Too Much Angst. Jamie has a lot of (very valid) angst surrounding her trauma, Emma has a rocky relationship with her dad and a lot of angst about liking girls as well as guys, both girls have a lot of angst about liking the other, and after becoming even closer after Tragedy strikes, the relationship falls apart. This was annoying because not only were Jamie and Emma genuinely adorable together, the disintegration of the relationship was both predictable and so easily fixable. Obviously they had to move away from each other for the storyline in the next book to work, but I feel like it didn’t have to go quite the way it did for what will obviously be a dramatic meeting and falling in love ten years after the events of Training Ground.

A lot of this book didn’t ring true with me. I’ve long accepted that while some things in life are universal, American high school isn’t one of those things, but in regards to the things I can comment on, the writing missed the mark. The dialogue, with a few surprisingly funny exceptions, didn’t seem very natural to me, and though the writing was okay, I felt that it leaned a little too heavily on clichés about teenagers. I have no idea how realistic the soccer bits are, being allergic to sports – but hey, Jamie and Emma are cute together, and I’m a big fan of Jamie’s therapist, Shoshanna.

Despite my review of this book, I’d consider picking up a copy of Game Time when it’s released in spring (autumn for you northern-hemisphere folk) this year, because I’m hopeful that Christie will be on firmer ground with not-teenagers. And I mean, who doesn’t want to read a romance about two pro soccer players?