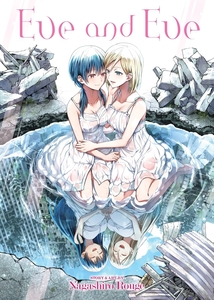 I believe the entire summary I gave of Eve and Eve on GoodReads was “This is the level of weird horniness I usually find in m/m manga and I almost respect it for that.” The actual summary is that Eve and Eve is Nagashiro Rouge’s single-creator anthology of f/f manga, and this is honestly a first for me! I usually have an easier time finding anthologies like this of m/m manga! … But I am seriously not kidding about it being weird and horny. The stories are mostly scifi, but there are a couple of slice of life stories, and the tones range from serious to incredibly silly. The art is mostly fine, but I have two major quibbles with it. The first is that the anatomy is notably out of proportion, especially when it comes to hands – I’m not saying that there’s panels where characters have hands about the same size as their eyes, but it’s close. The other is that all of the characters have invisible vulvas (presumably as the distaff counterpart to invisible cocks, a known hazard of m/m manga), so the sex scenes are dangerously close to mashing Barbies together.

I Want to Leave Behind a Miraculous Love — I am unbearably amused by Nagashiro Rouge cramming every single possible apocalypse scenario into one page. When I first read Eve and Eve in 2019, that was just a funny joke, but here we are in 2021 and I’m just like “Yeah, actually, that sounds right.” As for the story itself: two women in Japan who barely share a common language fall in love after at least five apocalypses, which they are the only survivors of! I found it quite odd, tonally! The motivations of Sayu, the POV character, confuse the daylights out of me, because she is specifically pre-occupied with having children with Nika so that whoever dies first isn’t leaving the other alone with no record of their relationship. I appreciate that this is the thin veil of causality that’s excusing the sex scenes, but the specific fixation on having kids instead of any other form of record-keeping or looking for other survivors baffled me.

(If you’re wondering what the pay-off is for that narrative thread, I’m just going to tell you that one of the apocalypses involved technologically advanced aliens leaving their human-creating tech behind, and you can fill in the rest. Just know that the invisible vulva aspect is especially egregious here.)

I’ll be honest, I’m not a fan of stories where people fall in love because they’ve got no other options, and between the language barrier and Sayu’s point of view so I felt like we don’t get much about Nika at all. So I Want to Leave Behind a Miraculous Love wasn’t necessarily bad but I really wanted more build up of the relationship than it had space for in a short story.

The Case of Eko and Lisa — Eko creates erotic manga and uses her sexbot, Lisa, exclusively as a model and art assistant, much to Lisa’s dismay. The story pretty much follows your expectations for a romance between a human and a robot, especially one where the robot is the instigating partner. Lisa’s cheerful pursuit and reaction to rejection is what I’d expected, but Eko’s profound discomfort with the idea of sex that involves more than one person (both in her work and in her own life) was honestly the thing that made this story stand out for me! She’s not put off by the idea of having sex with a robot, but she hates the idea of sex without emotion behind it, and that got me right in my grey-ace feelings. The Case of Eko and Lisa isn’t doing anything I haven’t seen before in terms of robot/human relationships, but for the most part it’s fun and I enjoy how done Eko is with everything, so it’s worth a look! … Although the visual distinction between humans and robots literally just being one seam line at the neck feels like such a cop-out.

Top or Bottom? The Showdown! — Okay, so much about the premise of this story was going against it; it’s school girls who move on from arguing about their RPS shipping of boys in their class (one of my squicks) to arguing about who in their group of friends would be a top or bottom (which I am done with as a fandom argument, because I did my time on this back in the 00s!) However, the end result is mostly cute and silly, and gets a little meta with the two main characters trying to fluster each other with the tropiest moves from romance manga, so I came away really fond of it!

An Infidelity Revisited — Two women who cheated on their high school boyfriends with each other meet up again as adults… And immediately cheat on their girlfriends with each other. The glimpse of the messy relationship the two main characters have is interesting, especially when one pushes back on any attempt to make it less messy. I would have really liked more of that aspect, although the level and drama and ambiguity is pretty solid.

Heir to the Curse — A web designer returns to her home village to see her childhood best friend announce her marriage – only to discover that her (cis) best friend has inherited a family curse that all women in her family must marry and impregnate a woman, regardless of their own feelings on the matter.

Oh boy, where to start with this one.

Okay, so, first off, there are parts of the relationship between the two protagonists that are really sweet at the start and the end, where they’re shown as loving and supportive and able to have fun together. Those bits are cute! I like how much they care about each other! But one of them is being held prisoner by her own family (grim), who drug the protagonist so that the love interest can rape and impregnate her (also grim), until they confess their love and have consensual sex as a follow-up. The shift from rape to a romantic relationship is in line with some of the genre conventions, but the nature of it being a short story rather than a series means that the switch feels really sudden and highlights how the problem could have been solved by them talking to each other. … I would also like more explanation of the origin story of this curse, because I feel like there were a couple steps that got missed out in the initial explanation, and in why the family continued the tradition! An explanation is suggested in the final panel, but it’s a bit slight. Heir to the Curse could have been my thing, but I’m very tired of stories where “Well it’s okay apart from the rape scene” is a valid response.

Eternity 1 and 2: Eve and Eve — A loving couple decide that the best way to immortalise their love is to… Become a living akashic record… By becoming the heart of a pair of satellites…? Look, I told you this was weird scifi, I have no explanations for you. It circles back around to the theme that I Want to Leave Behind a Miraculous Love suggests; leaving a record of yourself so the future knows that you were there and you were loved! Eternity 1 and 2 giving up their human lives and bonds specifically to lock their bond to each other in place is such a different answer to the one Sayu thinks of in the first story. I think I enjoyed it, but I will say that it has one of the most unnerving two-page spreads I’ve seen in a comic in quite a while. I promise, you will know it when you see it.

Eve and Eve: Epilogue — One of the things I liked about Eve and Eve was the way that the stories interweaved. Between Eternity 1 and 2 spying on the relationships from other stories, or Sayu and Nika finding newspaper articles about the satellites, it gives the anthology a sense of unity despite the vastly different tones, settings, and storylines. This epilogue rounds that out really well, and I appreciated that it has the characters considering a similar dilemma to Eternity 1 and 2, and making a different choice.

… So you see why my summary is that Eve and Eve is a weird anthology. It wasn’t my thing overall, but I think at least half the stories are worth a look – and I had a lot of fun overthinking its narrative structure, so it was worth the price of entry for that alone! 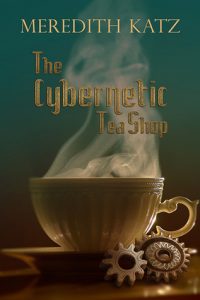