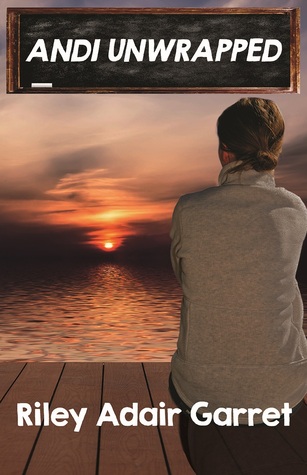 Andi Unwrapped, Riley Adair Garret’s collegiate romance about a popular English professor and her student, is a story about obstacles.  Garret throws up problems that prevent her heroines from being together almost from start to finish.  What starts out as being interesting and exciting starts to feel like tedious and unnecessary drama by the end, especially since Garret probably would have had more than enough drama simply in the given circumstances of her characters.

Andi Mattison is in her late thirties and has spent most of her adult life in an abusive marriage.  The book opens with one of the final moments of the marriage and it’s a compellingly written scene.  We see a villain in the husband and a complexity in Andi that unfortunately never surface again.  We jump ahead three years to where Andi is starting her final year as a Life-Long-Learning student at Wellsdale, a small women’s college.  She beings an independent study with Britt Avery, the resident professorial heartthrob, and sparks immediately fly.  While Andi examines her changing ideas of her own sexuality, Britt is very much out, but hasn’t been in a serious relationship in many years.  The two must navigate the ethical questions of a student-teacher relationship, both women’s past baggage and the various obstacles put up by the people around them, most of whom seem to want to sleep with either or both women.

Most of the book is quite good fun.  All the expected moments of budding romance are nicely developed and Garret’s written characters who have good chemistry together.  The classic ‘one character falls ill so the other must tenderly nurse them back to health’ scenario is deliciously entertaining.  The pervasive queerness of the women’s college setting is also a nice backdrop for the story.  But it seems like Garret hasn’t put enough stock in her characters.  She’s created two people whose given circumstances, Andi’s past marriage, Britt’s avoidance of commitment, could sustain the drama of their relationship.  Even if that weren’t enough, the fact that they meet as teacher and student and must protect Britt’s job and reputation also drives up the stakes for the two characters.  Instead there are an exhausting number of additional external circumstances, previous romantic obligations and obsessive crushes to name a few, that prvent the women from being together.  Andi does address the repercussions of her past marriage, but strangely with a friend for her psychology project instead of with Britt.  The external drama also prompts moments of dishonesty between Britt and Andi that are much more intriguing than the circumstances themselves.  Garret created such interesting characters, it would have been nice to see them really talk about themselves and their situation instead of constantly dealing with drama that at times felt unnecessary.