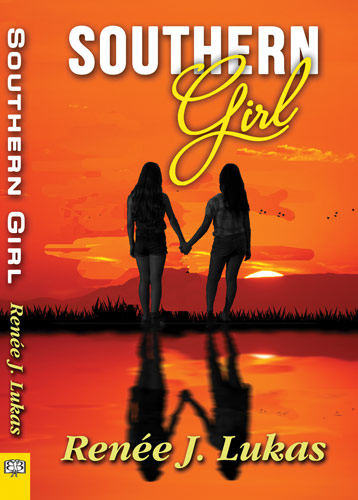 Southern Girl by Renée J. Lukas is an engaging portrait of a girl (and her family) from before birth through to the start of adulthood.

The novel begins with a brief snapshot of the protagonist’s parents: Carolyn, a New England lobster fisherman’s daughter and Dan, a Southern preacher’s protégé arriving at their ‘together’ house in tiny Green Fork, Tennessee. This brief scene sets the pace for their relationship throughout the novel and the impact of parental decisions on their offspring. In the next many chapters, we see the birth and significant moments of Jesse through somewhat childlike eyes.

As the main character grows, so too does the language and understanding of concepts shared in the text. Raised as the youngest daughter of a preacher in a Southern town, lots of the tension in Jesse’s life comes from small town familiarity and religion.

As a teenager, Jess deals with school troubles and youngest sibling contemplations. Significantly, a childhood friend, Stephanie, returns from Nashville. This triggers a series of events that has Jess questioning her sexuality, religion and connection to family. To avoid revealing more of the plot, these later-teen experiences are explored in depth and cover alcoholism, death, universal judgement, pressure on female athletes, pregnancy, and parental relationships.

Southern Girl knocks it out of the park on many levels – the intensity of teenage romances (both same and opposite sex), the conviction of youths raised within a church, the complexity of adult relationships and the strength in honest friendships.

While I felt some plot lines were a little too fictitious (particularly one involving both Jess and Stephanie’s mothers), the angst of yearning otherwise weaves together a strong portrait of self actualisation.

I was enthralled with the characters including some sitting on the sidelines; the musician brother Danny, the boyfriend Alex and the school friend Denny. I felt the development of the relationship between Jess and Stephanie both, at times, frustrating and romanticist – which, in many ways, is very true of new love. In fact, I thoroughly enjoyed the apt description of the fullness of a crush – how it can completely overcome all the thoughts and drive you outside of your comfort zone.

This coming-of-age, southern gal story finishes at the beginning of college and left me wanting to explore more of Jess’ story. I think it will be well read by a younger audience (compared to my late 20s) but enjoyed by all.