I have to admit, “cozy mystery set at a lesbian retirement community” was a tagline I could not resist. A Queer Death at Secret Pearl begins with Judith moving into Secret Pearl and immediately meeting an aggressively welcoming Cynthia, who attempts to take her on a tour, but is so high that she gets them lost until the golf cart battery runs out. The chapters rotate between different point of view characters, most of whom are as eccentric as Cynthia. There’s the “resident slut” whose purpose in retirement is to get all the sex she missed out in her closeted youth, a hypochondriac lamenting her inevitable demise (despite being fit enough to fight off an intruder with a shovel), a grouchy butch who goes by “Wheezer,” and more. Judith is a subdued, bookish retired veterinarian with a collection of abandoned animals she’s taken in–including a vulgar parrot named Hannibird Lector–who is reluctantly pulled into this community’s adventures, and surprises herself by enjoying them.

While there is a mystery element to this, I wouldn’t say it’s the focus. This story is much more about the shenanigans this wacky group gets into, including naked therapy, swimming with manatees, and playing with a ouija board. Oh, and a lot of sex. With the amount of sex talk and sex scenes included, you’d think it would be erotica, but they’re handled in a matter-of-fact way for the most part, not lingered on.

Of course, as the title suggests, there is a death at the beginning of the novella. While a wine and cheese tasting party was underway (which most of the residents found much too fancy and brought beer to instead), Betty was found dead in the bathroom, naked and sitting on a toilet. While this is a retirement community, she was relatively young and healthy, so the women begin to gossip about the possibility of murder, and immediately the taciturn Wheezer is the main suspect–mostly just because she doesn’t get along well with the people accusing her.

I expected this to be a mystery, with Judith investigating, but the death is mostly taken in stride. The coroner’s report is delayed, so no one knows for sure if there is anything suspicious about her death. It’s mostly just a recurring piece of juicy gossip, with people taking stands for or against Wheezer. There are occasional scenes of looking for evidence or puzzling things out, but they aren’t the focus.

This is a short, entertaining read with a lot of humor. It sometimes feels over-the-top in its goofiness (the police especially are cartoonishly incompetent), and there isn’t a lot of space to give most of the characters depth, but it’s light and silly, and I appreciate a story like this because there are so few books about older lesbians, especially ones that embrace sex.

There are two points that grated on me and I think were unnecessary: two characters talk about their “spirit animals,” and another character calls herself a “part time lesbian” and “a little bisexual.” It seems weird to me that the community (especially since it apparently includes hundreds of women, though we just meet a handful) wouldn’t exclude bisexuals or that Brenda wouldn’t just call herself bisexual.

Despite some minor issues I had with it, I really enjoyed reading it, and I’d like to see more stories set at Secret Pearl! I can imagine these characters stumbling into a lot more sticky situations in the future.

I used to be a fervent reader of romance fiction, fed by a steady stream of free or extremely cheap ebooks supplied through BookBub (if you like historical romance, contemporary romance, new adult romance, very teen fiction, or what is titled “women’s fiction,” I highly recommend signing up for this subscription newsletter–there are no costs attached). Historical romance was always my favourite genre, especially when the story was set during the Regency era (I know nothing about this period, I just love the dresses and the heroines, okay?). Then I started to develop a craving for queer Regency romance, ideally with queer women. Turns out that particular itch is a bit hard to scratch, as most queer historical romance is about men falling in love with other men. So when BookBub fed me this wlw romp for the meagre price of £0.99, I signed up! This was my first wlw Regency romance, and while it didn’t wholly convince me, I am still interested enough to keep looking for more within the genre (if you have any recommendations, please send them through on my blog).
Besides never having read a wlw Regency romance before, I’ve also never read any kind of romance before where the main characters are aged over 60 at the beginning of the story. While you might expect the higher age of the main characters to be a factor in my hesitancy, it wasn’t, or at least not directly. I’ll admit it made me think twice before picking it up, but the fact that Courtney Milan is the author assuaged any doubts I had going in, and she definitely made the characters true to themselves. Both Violetta and Bertrice are struggling to live their lives without much of a social circle to fall back on–Violetta’s closest friends died or moved away to Boston, and Bertrice’s friends seem to have all died. While it seemed slightly unlikely to me that both characters would be so isolated, it does mean they’re also desperate enough for social contact to grow close to each other without much outside encouragement. After the catalyst of the story throws them together (Violetta requires help and Bertrice is in a unique position to provide it, albeit in a roundabout way), nothing much tears them apart.
Other than the issue of money that is. Bertrice has bucket loads of it and Violette is barely scraping by. While this is not exactly a point of contention between the two of them, it does present itself in how they handle themselves differently in social situations (Bertrice is much more abrasive, as she knows she doesn’t need anything from people who get in her way), and how they treat each other (Bertice realises that she’s allowing Violetta to prepare, cook, and clean up after their first ‘date’ as if she were a servant). It also gives each character a different view on the world, and they are very open with each other about this. Those interactions were some of the more interesting ones to read, especially because they overlap so much with their discussions on patriarchy.

This is an angry book. In the author’s notes, Milan mentions she had to re-write certain plot points because she intended to publish shortly after Brett Kavanaugh’s hearings. If I were to re-read the book with that in mind, I’m sure I would be able to earmark specific passages that hark back to the treatment of Christine Blasey Ford during those hearings. We feel the powerlessness of Violetta in the face of being fired by a man so he could get out of paying her a pension, and then being thrown to the whims of a character most often referred to as the Terrible Nephew. We then see the ease with which said Terrible Nephew is able to manipulate other people to those selfsame whims, simply by invoking the Old Boys’ Club he is a member of. It is infuriating, more so because it still happens today.

Of course, Bertrice has a tendency to ignore or bulldozer men around her as much as possible (or as the situation calls for, if you were to ask her), and she is allowed this luxury because of the huge sum of money that belongs to her. Even she is often stymied by the Nephew, and there is a moment where the Nephew intends to have her declared incompetent. Personally, I cannot think of anything worse than being legally made so powerless that you are no longer allowed to make any decisions for yourself, even (or especially) when the story is already set against a historical backdrop where women are made heavily dependent and reliant on men (unless you become a ‘surplus’ women like Violetta, an intriguing concept unknown to me before this book and one Milan explains in a bit more detail in her notes).

Obviously, the story does not allow for such an ending. This is a romance, and we read romances to make ourselves feel better despite the world we live in, and that requires a happier ending than one where a main character is stripped off all her rights. So instead Violetta and Bertrice fall in love, and have a sex scene (this is also why we read romance novels, don’t lie). It is a lovely scene, if a bit brief. While the descriptions do take into account the age of the characters, it is never presented as a positive or a negative–it just is. It is a sweet scene, and a lovely counterpoint to the exuberant antics the two get up to outside of the house (Bertrice is a pro at practical jokes with the purpose to rid themselves off the Nephew problem), as well as that background of ever-present patriarchy.

The taste of it still lingers though, and this is where my slight hesitancy towards the book stems from. I read historical romances for escapism where possible. I can see the paradox in preferring Regency romance with its rampant patriarchy for my escapism. Even so, with a hetero pairing the author will often use that background to make their male leads look great in comparison (usually by clearing the lowest of bars, and occasionally they are still overbearing in their protectiveness). I haven’t before read a book where it is presented as it is here: pervasive and all-consuming and nigh insurmountable. In this story, the enemy is not just the patriarchy as embodied by a singular character to be beaten, the whole system is the enemy. And that was too big a shadow for me to be able to properly escape into the book. 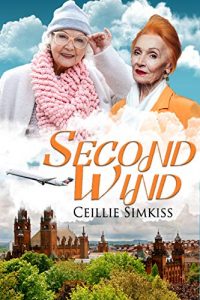 No matter how old you are, there’s always a chance for romance.

Second Wind follows Martha Appleby and Pamela Thornton, women in their seventies who reconnect on a flight to Glasgow following the death of Martha’s husband. During their trip, the two women begin to rekindle their childhood bond, support each other through difficult transitions and understand why they parted ways all those years ago.

With endearing side characters, idyllic settings and an uplifting, romantic storyline, Second Wind promises to whisk you away and, with its short page count, makes for a lovely, breezy read.

It’s incredibly refreshing to read a love story about older protagonists, and particularly queer women. The main characters brim with personality, quips, quirks and distinctly different temperaments. Martha’s relationship to her deceased husband is never dismissed or downplayed, yet it never overshadows her blossoming romance with Pamela. The two simply exist together in the same story, Martha’s story.

Second Wind is short enough that we don’t get as much background on the main characters as readers might like, outside of the flashback chapters, but there’s a lot to fill in considering their decades-long personal histories. For this reason, some readers might find it lacking, but the story itself, following these characters at this point in their lives, is an absolute delight. It’s sweet and simple, heart-achingly romantic and abundantly hopeful. The stakes are mundane but intensely real.

Not all books have to be dark and full of complicated twists and turns in order to be enjoyable. This novella is charming and refreshing in its simplicity, reminding us that you can still find love (and specifically, queer love) no matter your age.