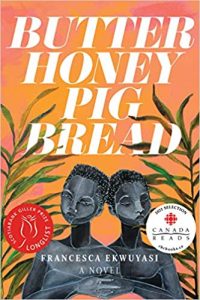 This was such an impressive book that I have been intimidated to write about it! It was longlisted for the Giller Prize, and it was on Canada Reads! (If you’re not Canadian: this is a big deal.)

Trigger warnings for suicide and suicide ideation, miscarriage and child death, as well as rape and child sexual abuse, both for the book and this review.

This is a book about three Nigerian women: Kambirinachi and her twin daughters, Taiye and Kehinde. This is split into four books, which you may have guessed are titled Butter, Honey, Pig, and Bread. In the first book, we’re introduced to Kambirinachi. She is an obinje, which is an Ebo term for spirits who are said to plague a mother by repeatedly being born and dying early. She finds being alive boring; it makes her restless. She can hear her kin all around her, always calling her back, so dying is a simple thing. After she sees how much her mother is tortured by her miscarriages and early childhood deaths, though, Kambirinachi decides to stick with life, much to her Kin’s disapproval.

We then jump to Taiye and Kehinde visiting their mother as adults. It has been a long time since the sisters spoke to each other, and the three of them have drifted apart due to an unnamed Bad Thing that happened. We find out that this bad thing was the rape of Kehinde as a child while her sister stayed silent under the bed. They have never openly talked about this, and it’s driven a wedge between them. The whole story spirals around this point, and we see their lives before and after this point out of sequence.

Although this isn’t told chronologically, it flows smoothly and is easy to follow. I hardly noticed that it was jumping around in time, because it always seemed like a natural transition. We follow each of their perspectives, and they all feel realistic and deeply flawed, which I think is the strongest part of the novel.

Kambirinachi struggles with life. Her daughter describes her as “beautiful in an impossible way, a delicate thing. Too soft for this world.” She loves her children, but falls into a deep depression after her husband (their father) dies, unable to take care of them or herself.

Taiye and Kehinde define themselves in opposition to each other. Kehinde feels inferior, like Taiye is the perfect twin and she is made up of the castoffs, especially because Taiye is the thinner twin. Despite having a husband and being successful, she always feels as if she’s in her shadow. Taiye, on the other hand, constantly feels rejected by Kehinde. As a child, she relied on her sister to talk for her. Now she feels lost in the world, overcome by her voracious appetite both for food and sex. She is constantly thinking about the women that she’s been with, but none of them seem to last.

One of her exes mailed a box of Taiye’s letters to Kehinde–except that Taiye never meant to actually send them. When they meet again, she avoids talking about the letters or acknowledging how painful she’s found their separation. This is an exploration of these flawed people and their complicated, layered relationships with each other.

Although it deals with difficult subject matter, it feels hopeful. There are plenty of fractured relationships here, but there are also supportive, kind, gentle relationships with healthy communication that makes me swoon. There’s also, unsurprisingly, a food theme. Each of the foods in the title shows up repeatedly, with slightly different meanings: a bee hive is a life-altering outing, a secret indulgence, or a staple of the household. Characters cook for each other when they don’t have the words to explain themselves

I highly recommend Butter Honey Pig Bread for fans of literary fiction, queer books, food writing, and anyone who wants a good story. If you’re on the fence, here is a video with the author reading excerpts–I’m sure you’ll quickly be hooked.