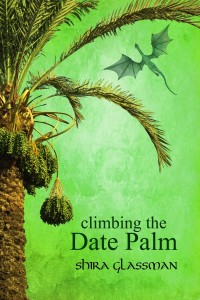 She also picked up a mango, and then, after thinking about it for a moment, bought a second as well.

The Second Mango is the first in the Mangoverse high-fantasy series. It felt so good to read fantasy again! Especially a book that I have been meaning to read for a while and now that the series has finished, I started. I had forgotten what the book was about, I just knew I wanted to read it so some things came as a surprise.

The series is set in a tropical setting but within a Jewish religious background which I had never read about in such a combination before. The plot follows Shulamit, a princess recently turned queen and Riv, her new appointed guard – after Riv saved her from being kidnapped after she visited a bawdy house to visit willing women. The rescue is the start of the book, so you can guess it was funny.

Queen Shulamit is skinny, of average looks and has black hair. Riv is tall and comes from the north. The two develop a friendship based on grief, trust and in my opinion, mutual book-nerdery. Riv becomes Shula’s traveling companion along with a horse that is sometimes a dragon. Riv is offered the position of head guard if Shula finds a sweetheart on their journey. Shula doesn’t know how to find other women that like women, after her ex, Aviva bailed on her so she has the idea that anyone wanting to avoid a husband would probably join a religious order… and they set off to visit these orders.

They run into adventures on the way. We see how Shula is quite the detective and intelligent and acts to save herself. Riv also has a painful past. Since it’s in the description of the book, I can reveal that Riv is actually Rivka, a woman that passes as a man for convenience. Rivka is a great warrior that fought to be the way she is. Rivka also lost her partner, the wizard Isaac. We get to see both Rivka’s and Isaac’s past and Shulamit’s and Aviva’s and I have to say, although this book is short, the four characters are developed and human.

The book subtly addresses gender identity and sexual orientation, although how gender identity is explored at one point is a bit problematic (it’s not just cross-dressing). There’s also a touch of biphobia in a comment meant to hurt but it’s not by our protagonists. I believe it also addresses the sexuality spectrum. Rivka isn’t someone that loves a lot and she only started feeling for Isaac, I believe, only after forming a connection with him. Perhaps because of the lack of ace and aro representation in literature but I believe that Rivka falls in the asexual spectrum (perhaps as a demisexual). I think there’s also a misunderstanding of what a sex drive is but, perhaps I over-analyzed. There are non-explicit sex scenes written between two women and a man and a woman that I think focus more on the emotions felt.

Although the adventures may seem as simplistic at times, they are fun and there are badass moments from our protagonists. Both Riv and Shula help each other grow and face insecurities. It’s a lovely start of a series.

I’d definitely recommend this book to fantasy lovers, people that have eclectic book tastes, people that like to see positive growing relationships and also great relationship material between a man and a woman, with it not being the main focus.