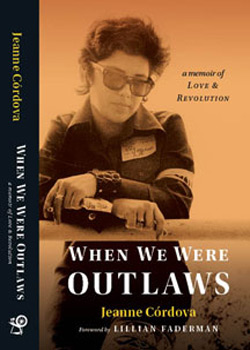 It was a happy coincidence that When We Were Outlaws reached the top of my TBR stack just after it won a Lambda Literary Award. I was already looking forward to it, but the win pushed my expectations a little higher. I can definitely see when Cordova won. When We Were Outlaws is equal parts a historical look into the feminist and gay/lesbian activism of the 70s, and a personal memoir about a love affair. It took me a little while to get into, but by the end I was totally gripped.

When We Were Outlaws starts off with a flash-forward. Because I didn’t yet know the political situation or any of the people mentioned, I wasn’t particularly interested at that point, but it all begins to come together later in the story. And it definitely has a story: When We Were Outlaws is written like a novel, and at the height of the story’s drama I couldn’t help but think it was close to a lesbian pulp fiction book. Jeanne Cordova as portrayed in the book is passionate as well as logical. She can map out how activist strategies will unfold and account for the consequences of this, structuring the plans around this. She is logical and fairly realistic in her activism. At the same time, she is floored by passionate romances and twice is spun into deep depression over love affairs.

When We Were Outlaws does a great job of showing the tension between Cordova’s political beliefs and activism, which dominate her life, and her personal relationships, both threatening to overturn the other. Cordova’s relationship with Rachel is heartwrenching (and very, very lesbian). I was torn between needing to see what happened and hardly being able to pick up the book knowing how intense the emotions are, and how I wouldn’t be able to help feeling that vicarious pain.

There were a few minor editing errors in the book–an endnote that led nowhere and a couple paragraphs beginning in the middle of a sentence–and the flash-forward in the beginning didn’t work for me, but those are very minor complaints. Overall, I would highly recommend When We Were Outlaws, both as a historical text (it’s fascinating to see what’s changed and what’s depressingly the same in activism between the 70s and now) and as a memoir. 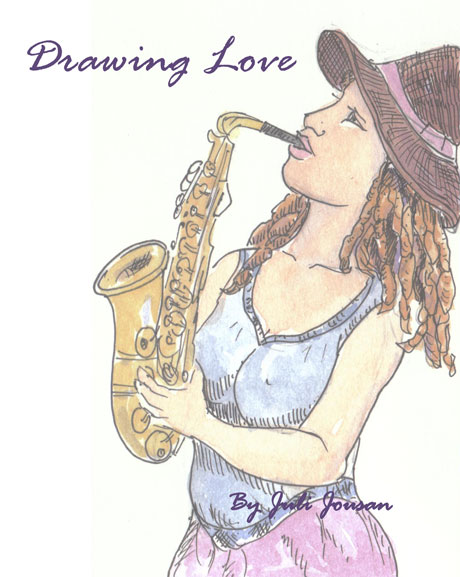 Drawing Love by Juli Jousan treads a fine line. It could easily seem overwrought or juvenile. Drawing Love alternates between the present and a description of the main character, Mo, having a dramatic high school relationship. By relating that in flash backs, and showing that Mo has moved on and grown up since then, it avoids being completely mired in the drama of the situation. Throughout the book are Mo’s drawings, which I don’t really feel comfortable commenting on, because I don’t really know enough about art to critique it. They are mostly line drawings.

Some of the writing, like the dialogue between Mo and her mother, seems a little stilted, but it manages to avoid that most of the time. Drawing Love offers a brief glimpse into a life, mostly showing a college relationship with the flash backs to provide context. There are lots of drawings, large font, and wide spacing throughout the novel, making it an easy 2 hour read.