Detective Roxane Weary is hired to prove a man’s innocence before his death sentence is completed for a crime he’s been claiming he didn’t commit. As she investigates what seems like an open and shut case, she starts to unravel a web of crimes that have gone undetected for decades. When another young girl goes missing, Roxane knows she has very little time to solve them all and save her client’s brother from a fate he doesn’t deserve.

Overall, this is a fast-paced story that keeps you turning the pages, wondering who is the true culprit of the crimes in question. Somewhere halfway, it goes off-road, but eventually, it leads back to the main mystery at hand. However, while it touches the surface of issues of racism and police brutality, it never delves into them. The man in prison for the murder of a white woman is a black man. Roxane briefly acknowledges the implications of how racism could have played a hand in the investigation and sentencing. But it doesn’t go beyond that, as it gets lost in her obsessive need to unravel the mystery of so many women presumed missing.

Roxane Weary is a messy and complicated character. I kept making the connection to Marvel’s Jessica Jones, a private eye with alcohol addiction who is still very good at her job. Roxane isn’t necessarily a great person, but she’s not necessarily a bad person either. In fact, she’s rather endearing in her imperfections, even if her behavior can sometimes frustrate the reader. She’s depicted as having casual relationships with men and women, but it’s never described as the stereotypical, “All bisexuals are cheaters.” She’s just a trainwreck because she hasn’t coped with the trauma of her difficult childhood and the recent loss of her father.

The Last Place You Look has a compelling mystery with an intriguing character. It’s a fair set up for a different player in the mystery-thriller genre. 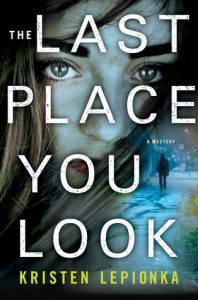 I’m constantly on the lookout for new mystery series that feature strong, independent female characters, and if they’re lesbian or bisexual, I count it as a bonus. For the past several years, I’ve been hearing all manner of positive things about Kristen Lepionka’s Roxane Weary books, and so, I finally decided to give them a try.

Roxane is a private investigator who is pretty much going through the motions of living. Her police officer father died not too long before book one begins, and his lost has hit her hard. Plus, she’s struggling to make sense of her feelings for a woman she’s been seeing for quite some time, but who seems unwilling to take their relationship to the next, more serious level.

When Roxane is hired to take a second look at the long ago disappearance of teenager Sarah Cook, she throws herself into the investigation. Sarah’s boyfriend Brad was convicted of killing Sarah, but Brad’s sister isn’t convinced he’s guilty and she’s desperate for Roxane to find the real killer. Initially, Roxane isn’t sure the first investigation had any real flaws, but as time passes and she turns up far more questions than answers, she finds herself ever more convinced something went terribly wrong for both Sarah and Brad.

To make matters worse, her investigation into Sarah’s disappearance has a possible link to one of her father’s unsolved murder cases. In hopes of laying both matters to rest, she joins forces with Tom, her father’s former partner on the police force. The two have always gotten along well enough, but as they begin spending more and more time together, Roxane finds herself developing deeper feelings for the detective. Of course, a relationship with a man isn’t something she’s interested in. At least, that’s what she tells herself.

The Last Place You Look is a dark and gritty mystery with a plot that kept me glued to my iPad until I reached the end. I couldn’t wait to figure out what really happened to Sarah and how her disappearance linked back to the case Roxane’s father had been working on years before. The author does a phenomenal job sprinkling small clues throughout the text without giving the big twist away too soon. I’m often frustrated when I solve a mystery early on, but this one was complicated enough to keep me guessing right along with Roxane.

If you don’t like characters with self-destructive tendencies, Roxane might be a challenge for you. She’s strong, smart, and competent, but in many ways, she’s her own worst enemy. I found myself frustrated with her poor decisions on more than a few occasions. Fortunately, the author provides enough backstory to help readers understand why Roxane struggles the way she does, something I found extremely helpful. I don’t expect characters to be perfect, but I’m a lot more forgiving of their shortcomings if I have at least a basic understanding of their motivations and Kristen Lepionka definitely provides that here.

The mystery is wrapped up by the end of this first installment, but there are still quite a few questions about Roxane and those she loves. Fortunately, there are three more books in this series so far, so readers can continue to follow Roxane as she struggles to bring justice to those who need it while also attempting to put the fractured pieces of her life back together. Book one was a solidly enjoyable read, so I’m anticipating more of the same as the series continues.