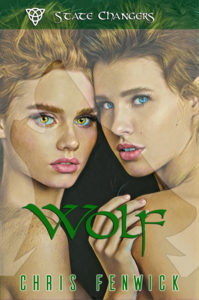 The first book in the State Changers series by Chris Fenwick is Wolf. I wanted to read this book to expand more outside of what I usually read. I used to read a lot of fantasy books when I was younger, and thought that this would be a great way to dip back into this genre. The description of the book piqued my interest, as I don’t know very much about Irish magical lore; but I do know that there is a rich history of magic there. I was interested to see how Fenwick would play with these conventions, while mixing in some queer content. Anything with a strong, female lead will usually get me to give it more than a passing glance when picking my next read or watch. I was glad to pick this book up.

In reading more about the author, Chris describes that she likes to have characters who happen to also be lesbian. That is exactly what reading this book felt like for me. The fact that the main character, Casidhe is a lesbian doesn’t get established until later on. There are other queer characters in this world as well, beyond the immediate love interest. It was refreshing to read something like this, a lighter fantasy read with an ongoing plot that doesn’t feel like anyone’s sexuality is a forced part of the character development. One thing I will note though, is that there is scene of loss that is a main plot development point. However, I didn’t feel like the way that Casidhe handled the situation emotionally was quite as realistic or in-depth as it could have been. That’s just my personal opinion, based on my own losses. It was easy for me to be able to look past that and take in this book for what it is. I’ll probably continue to read the State Changers series, and further get to know the characters and their magical world.