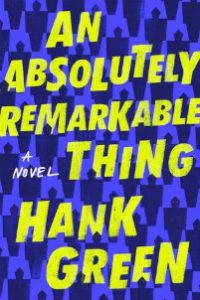 About three years ago, I saw a post on tumblr from Hank Green, which read: “Remember when I said I was writing a story about a bisexual girl and a robot?” I was, of course, immediately intrigued. I’ve been following the Vlogbrothers for many years, and I’ve read almost all of John Green’s books (though they aren’t favourites of mine). I would already be interested in a book from Hank Green, but of course it having a bisexual girl main character really upped it. By the time An Absolutely Remarkable Thing came out, I had heard lots of excitement around the book, but nothing else about the queer content. Did it get written out? Did I only imagine that tumblr post?? I then began my usual research when I stumble on a book that maybe-possibly has queer women content. I’ll save you the Goodreads scrolling and assure you: yes, this book has a bisexual woman main character, and it’s not even a one-off line. Her relationship with another woman forms–I would argue–the emotional centre of the book, and frankly, it’s a little irritating that it took so much searching to confirm this.

On to the book itself! I listened to the audiobook, and I would highly recommend that process. The narrator was great. Before I say anything else, you should know that this is not a standalone book. I believe it will be a duology, but it’s definitely not the only book in this story (I wish I had known that before I reached the ending!)

If you’re a fan of Hank Green and Vlogbrothers, I would definitely say that this is worth picking up. Despite being a story about first contact and robots and a bisexual woman’s complicated relationship with her roommate/girlfriend, Hank’s voice really comes through. It’s a thoughtful book that has a lot to say about fame–internet fame in particular. April finds herself suddenly famous, and she leans into this. She makes herself a brand and has a media presence strategy. She becomes more and more invested in having her voice her, and trying to sway the general conversation. As that process continued, I became more and more uncomfortable, but never ever to say exactly where she might have crossed the line.

But if you are reading this review, you’re probably more interested about the representation. There is, understandably, some suspicion when a man is writing a queer woman character. Hank speaks to this in another tumblr post, which I recommend checking out if you have questions. I won’t deny that I went in with a more critical eye than I would from an #ownvoices author, but I don’t have any big objections to the representation.

[mild spoilers] There was a moment where I raised an eyebrow: April’s agent asks if there’s anything else they should know, anything that might come up… something that may be controversial, or secret… and April does not even think about bringing up her sexuality. When she is directly asked, she is open about it, but she doesn’t think of this as something that her agent might have to consider, which I personally felt would be pretty obvious for a queer woman.

After that, though, her agent asked: couldn’t you just be gay? You dated men, but you were gay all along? It would be easier. That seemed accurate to me. April says, “It was easier for her to sell a quirky lesbian than a quirky bi girl, so I was a quirky lesbian for her.” [end spoilers]

As for April herself, she is definitely a complicated character. She is deeply flawed, and although she acknowledges this, she’s not very apologetic about it. She can be ruthless in pursuing her goals, and callous when it comes from other people. She is insecure and pushes people away. She denies her own feelings. She is selfish and reckless. But she also has good intentions, and she feels so real and relatable. Her flaws feel personal, and her bad decisions are understandable, if not defensible. If you don’t like “unlikable” characters, you probably won’t like her. Personally, I kind of loved her.

I really enjoyed this! It gave me a lot to think about. Although I liked the audiobook narration, I feel like I want to reread this in a physical format just to have some time to process and think about the issues that it brings up. I’m looking forward to the next one!