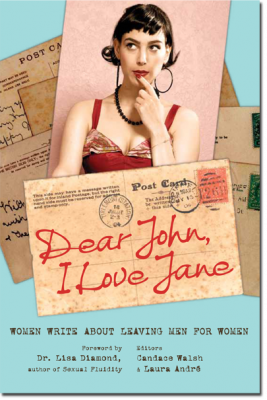 I love this book. I just want to say that straight off the bat. In any minority (of power) group, telling our own stories is crucial, especially when they’re stories that defy the narrative that has traditionally been put forth about that group.

The foreword of Dear John, I Love Jane is written by the author of Sexual Fluidity, which is a book I now really want to read. The only problems I had with the book in general were that the introduction and foreword combined seemed pretty lengthy, and the introduction especially seemed unnecessary.

Also, I was initially irritated because the  foreword set the tone for stories about sexual fluidity, which I was very excited about being able to read, because we have a very Born This Way, rigid conception of sexuality in our society, and I wanted to see the stories this framework ignores. When the first few stories didn’t really address sexual fluidity, I was disappointed, but by the end I was completely satisfied.

The major thing I loved about Dear John, I Love Jane was the quality of writing. With a topic this narrow, I didn’t have very high standards, especially since anthologies generally have a range of quality. Most anthologies tend to include at least one story that you really hate. This was not true! I actually didn’t have any story that I didn’t enjoy. They varied in styles, but I thought the quality of writing was high in each one.

What makes Dear John, I Love Jane so valuable, though, is the variety of the stories told. As I said, I was hoping for stories about sexual fluidity, and there were, but they weren’t the only ones. Dear John, I Love Jane represents many different situations where women left men for women. In some, it was because they had always been attracted to women and only were with a man because they felt it was the right thing to do. For others, though, they really were deeply in love with the man they were with. For some, it was one woman who changed everything, and had nothing to do with their sexuality, just with the individual. And some women decide to stay with their husband. It really represents a range, which I found refreshing.

I also enjoyed the portrayal of men in the stories. Some of the partners are not ideal mates, but many are wonderful people, and it brings more nuance to it. I think that men in Dear John,  I Love Jane are primarily positively portrayed, which just makes those situations so much more difficult and interesting.

Overall, I highly recommend this book. I only keep books that I want to re-read at some point, and this is definitely one that’s going to go into my permanent collection.

(Check out the Dear John, I Love Jane website here!)