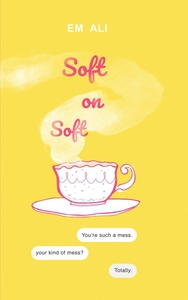 Despite my comparison at the beginning, Soft on Soft by Em Ali (which I received as an ARC with a different title, #FatGirlsInLove, that appears to be a working title) is an entirely unique story. It’s a romance between two fat sapphic women: Selena, a Black demisexual model, and June, the Arab-Persian, anxious make-up artist. Thanks to the profession of the two protagonists, Soft on Soft is full of diverse bodies being celebrated, colourful descriptions, flowers, and altogether vivid mental images.

The book’s plot can mostly be summarised as Selena and June flirting, hanging out with friends, going on dates, making geeky references or working together. It is a character driven novel that is perfect for people who just want to read a cute romance and don’t mind the minimal plot – and really, the characters are worth staying for. The supporting cast has multiple nonbinary characters (with different pronouns), one of whom has depression and some really relatable remarks about mental health and therapy. Also, one parent of the main couple is bisexual, which is awesome – I very rarely see older queer characters, especially parents with adult children.

One strange thing was that the characters in this book talked in real life the way I’m used to people talking on Tumblr, and it was just a strange dissonance to see that kind of language being used in offline conversation. For this reason, some sentences seemed like they weren’t really lifelike, but I’m sure people actually talk like this and I’m just not used to it. (Also, “I’m green with enby” is a great pun I must use.)

In short, this was an adorable novel with diverse characters and colourful settings (and also, cats!). I admit I generally prefer books with a more exciting plot, but people who just want a cozy sapphic romance with fat characters will love Soft on Soft.