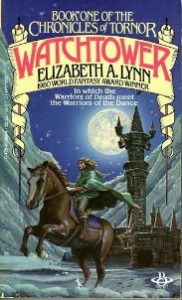 Elizabeth E. Lynn’s first novel, Watchtower, is a fantasy that won the 1980 World Fantasy Award for best novel. I haven’t read a lot of fantasy books, but I’m trying to broaden my horizon for the Lesbrary. Watchtower is about Ryke, a commander who defends Tornor Keep. When Tornor Keep is invaded (don’t worry, I’m not spoiling anything, that’s on the first page) and the lord of the Keep is killed, Ryke does everything he can to defend the prince, Errel. Eventually he does this by joining two women travelling (aah, now you understand why I’m reviewing this book here). The women are clearly a couple, but although the characters are the second most important, after Ryke and Errel, their relationship isn’t fussed over much. 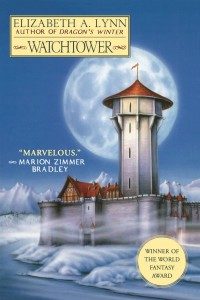 Most of this book was traveling. There’s a fight in the last 20 pages and the first 20 (or less) pages, but most of the rest is spent on horseback. I actually didn’t mind that, because presumably the book is mostly about developing Ryke’s character. The problem was that I didn’t really see it develop. In theory, Ryke learns new expectations about women and about the role of war, etc, but I never actually remember Ryke reflecting that. These opinion-altering things happen around him, but you don’t really get much of a sense of how he’s dealing with it. I liked that not a lot of emphasis was put on the fact that the women were in a relationship, and I liked how their personalities came out more and more.

To be honest, I had one big problem with this book: I felt that it was really choppily written. The sentences were so short, and consistently so, that I was distracted from the story by the writing style almost the whole way through, making it sort of a struggle to finish. For example: “They walked down a street, the only street. The well stood in its center. The village looked deserted. No children hung about the buildings. […] They walked into a cottage. A woman sat at a table. A square window opened at her back. The room smelled of dust and ink and light” (page 99). Maybe it’s just me, but the sentences seemed really abrupt, and the things that were described in detail seemed to be totally random, like a clip in some woman’s hair.

Have you read Watchtower, or any of Elizabeth A. Lynn’s other books? What did you think of them? Have you ever found a book a struggle to finish solely because of the writing?