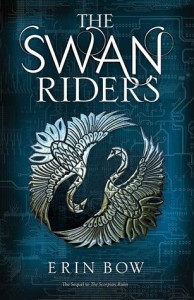 After hearing only good things about the Scorpion Rules duology, I was eager to pick it up. Unfortunately, I read the first book during a readathon, and reading a crushing dystopian story about war and brutality was not the best choice to read all in one sitting. It was darker than I was expecting, so I wasn’t emotionally prepared for it. I was, though, interested in the ideas introduced in the book. So I took a few months break before I picked up the second book in the series, The Swan Riders, in the hopes that I would be more prepared this time.

I spend most of my time reading this book thinking This is the reading rule you seem to re-learn over and over: just because people say a book is great, doesn’t mean you, personally, will love it. I have long since realized that it doesn’t matter how high calibre the quality of a book is if it doesn’t immediately appeal to me. Still, I continued with the sequel, because I had heard it was an improvement from the last book. Perhaps I was less connected to the characters because of the break that I took between books, but I was having trouble pushing through.

I have, historically, been a fan of dystopian novels, but this one I found hard to deal with. It’s just so straightforward about the suffering experienced. The pain. The first book includes a detailed scene of torture that nauseated me. The second book describes the slow deaths of several characters, all involving increasingly close together seizures. While the first book has some semblance of an us vs. them clarity, Greta spends most of her time in The Swan Riders alongside the villain of the previous book.

By the end of the narrative, I had come around. The strength of this story is in its ideas, especially (for me) its exploration of personal identity and humanity. [spoilers for first book:] Greta is an AI now, and she begins to drift away from her humanity and empathy, assisted by Talis’s intervention. [end spoilers] It takes this idea, of an AI enforcing global peace, and shows how tangled it is. How can global peace be achieved? Can it? And what amount of sacrifice is worth it? Clearly, Talis’s strategy is not defended by Greta or the narrative, but there’s also not a tidy alternative.

As for the queer content, there is definitely no central romantic story here. In fact, Greta does not interact with Xie for the whole novel. But her presence is there, nonetheless. She is Greta’s tie to humanity, to retaining her true self. She is a memory that Greta clings to. She is, in some ways, the home that Greta spends each step of her journey longing to return to. So although she isn’t a central character, she is a very important one.

For all my ups and downs with this duology, I would still recommend it, but with some caveats: this is not a queer Canadian princess fantasy-esque story that the blurb had me prepared for. This is a dystopia that is focused on war and its casualties. It is thought-provoking, but brutal.