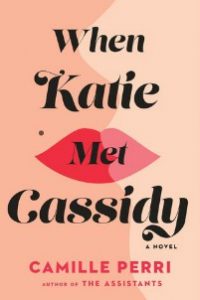 There has been a ton of buzz around When Katie Met Cassidy. Whenever I see this much attention being given to a sapphic book, of course my ears prick up. Let’s face it, queer women books don’t usually get much press outside of a handful of specialized sites (like this one!) When I read an article by this author (“Telling Queer Love Stories with Happy Endings Is a Form of Resistance“), however, I started to get doubtful, even as I added this title to my TBR. Obviously I agree that we need happy queer stories, but reading an entire article about F/F relationships depicted in media without one mention of the genre of lesbian romance was… confusing. F/F relationships with a HEA (“happily ever after”) is the hallmark of the lesbian romance genre, which has been going strong for decades. There are several publishing companies putting out nothing but these titles. So it seemed odd to me to have this author–of the book that has been praised as a lesbian romance you need to read–seem unaware of the existence of this entire genre (or at least to not think it’s worth mentioning).

So I will admit that I was cautious approaching When Katie Met Cassidy. As I listened to the audiobook, my doubts were quickly justified. Despite the praise it’s gotten, this story did not agree with me. In case you aren’t aware, the premise is that Katie is a straight woman (whose fiance recently dumped her) who finds herself falling for Cassidy, a butch, womanizing lesbian. Now, I am all about books that explore sexual fluidity, or coming out later in life, or discovering new labels for yourself. But Katie starts off the story gratingly anti-queer. She cannot stop (mentally) commenting on Cassidy’s masculinity. She critiques her clothes and mannerisms. She immediately assumes that because Cassidy is masculine she must be a lesbian–and laments that being a lesbian would be so much easier. (Despite being shocked that Cassidy has made it so far in their profession while wearing pants instead of a skirt…)

Of course, this is a romance (though not a Romance? This definitely seems to be marketed as Fiction while also being all about the romance), so Katie is intrigued by Cassidy. When she bumps into her outside of the office, she is convinced to go to a lesbian bar with her. Katie assumes that the women there will be “angry” and hypermasculine. All the praise for this book says that it is a light and fluffy read, but I found Katie’s attitudes painful to read about in a queer romance novel. Later, when Katie visits Cassidy’s home and is snooping through her clothes (yep), she continues to be surprised by her owning “men’s clothing,” and is absolutely scandalized when she finds out Cassidy wears briefs. As in, she is so shocked that she thinks I can’t be here. I have to go home. This is too much.

Cassidy feels like a flat stereotype of a butch woman. I was reminded of this tumblr post:

Whenever I hear talk about “stereotypical butch lesbians” I have to remember that I’m operating from a totally different window here because like:

Butch lesbian stereotype written by a straight person: Cold, unaffected, detached, beer-swilling grump who looks out for herself and needs to learn tenderness.

When Katie Met Cassidy is an own voices representation of a lesbian, but Cassidy is exactly that detached butch who needs to learn how to let people in. There is some odd backstory that seems to say that she was in love with her straight best friend as a teenager, and that’s why she’s never let any woman in since then? Of course, Katie–with her charmingly backwards attitudes, who keeps drunkenly asking why Cassidy is gay–is the exception.

I kept getting the impression that this was a lesbian romance from the 80s (other than the cell phones). It’s not that it was bad, it just felt like a lesbian romance that is completely disconnected from the history of lesbian romances and from modern times. The concept of bisexuality is never mentioned.Katie has been dating men her whole life, has never questioned her orientation, was just recently engaged to a man, and now is only debating whether she is gay or not (now that she’s fallen for Cassidy). She basically just looks back and thinks “Oh, I guess I was actually in love with my best friends this whole time and I didn’t know.” Which is fine! It’s fine to have a character date men and later realize she’s a lesbian. That happens! But it’s so weird to me that no one–not the whole bar of lesbians, not Experienced Lesbian Cassidy–mentions that there is an option other than gay or straight.

Ultimately, this is a book about two people falling in love, and between Katie’s prejudice and Cassidy’s flatness as a character, I just wasn’t invested in either of them. There isn’t much of a plot outside of the romance, and that relationship was soured for me–especially in an egregious bit of callousness by Katie late in the novel. It was a quick read (well, a quick listen), but I wouldn’t recommend it. Of course, plenty of people disagree! I know this has been a favourite for lots of people, so maybe check out some of those other reviews, too, if you’re on the fence. If you are one of the people who really enjoyed it, feel free to let me know why in the comments! Everyone has different reading experiences with the same book, so I’d love to see where we differed.