This book has been on the edges of my radar for a long time, and I’m not sure why I never got to it before now. Luckily I picked it when I was browsing through my ereader for something that might help to break my reading slump, with no idea what the book was about beyond it being a YA story. If I had known before starting that it was about schools integrating in the South during the 1960s, I probably would have skipped it, assuming something with such serious and intense subject material would be too much for me to keep going. I was very wrong about that, and hopefully I’ll be able to bear that in mind when picking future reads set during turbulent times.

This story follows Sarah and Linda, two girls starting their senior year of high school. Starting their senior 5 months late, because the governor of Virginia closed all schools in a bid to prevent them from integrating as was ordered by the Supreme Court five whole years before. When the schools are eventually forced to open and allow Black students, Sarah is one of the first Black pupils to attend. It does not go smoothly. I’m pretty sure we’ve all seen footage of the abuse Black children suffered as they walked up the path to enter their now desegregated schools, and this book does not shy away from the reality of the situation.

I found it extremely interesting to see that all of the students and their families were cherrypicked, and they were coached on how to handle this and any other situations they might find themselves in over the course of the school day and the year ahead. One of the main messages in this book is that despite all their goodwill and good intentions, the people on the outside can never understand what goes on inside the school grounds. It isn’t pleasant or pretty, and Sarah learns that in order for the whole movement to grow and move forwards, individuals will have to make personal sacrifices that are likely to go unnoticed by history.

Sarah is very good at self denial, but never loses sight of her own identity – even when she’s not sure how to define that identity. She knows she’s always had certain feelings for other girls, and she learned relatively early that those feelings are ‘sinful’ and ‘against God.’ When she has to join with Linda – a very popular white girl and daughter of the very conservative editor of the local newspaper – for a French group project, that self denial and testing of identity become very prominent. Linda is a staunch segregationist, but she’s also intelligent. She doesn’t want it to come out (and she especially doesn’t want it to come back to her father) that she’s working on a school project with a Black student, so they find a quiet space where no one will see them. While this escape from the public eye is for clearly racist reasons, it provides both Sarah and Linda with a space to speak more freely, even while they know they can’t have this kind of open discussion outside of closed doors.

It is the first time either of them can speak so freely with someone of a different ethnicity, and Linda especially is forced to reconsider some of the party lines she has been parroting all her life. As soon as someone asks her to use her mind and actually consider the implications and internal contradictions of her arguments, that starts a process within her that can’t be stopped. She carries her questioning mind into other conversations, with white peers and white figures of authority. This is not a straightforward journey, and for every step she makes forwards, she will make some kind of step backwards as well. It’s confusing for both girls, and the fact that they are both developing feelings doesn’t make matters any less confusing.

The relationship development between these two characters is the core of the book, and it is very strong and thoughtfully written. The author adds plenty of (well researched) historical background and notes, and fleshes out all main, side, and background characters well. This book makes you think a lot, about the insidious ways racism and other forms of bigotry work and interacted, with small throw away lines occasionally making you sit down and think through the various implications. 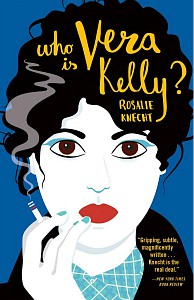 Who Is Vera Kelly? is a thoughtful, twisty spy thriller, whose eponymous protagonist is a queer American spy in 1960s Argentina. Vera’s life unfolds in fragments through the novel: passages in her present day, in which she is working for the CIA to monitor the unstable Argentinian government and suppress communist interests, are interspersed with passages recounting her troubled adolescence, young adulthood, and path to the CIA – as well as the path she takes coming in to her lesbian identity.

The novel is a spy thriller, but one with a little more languor: the focus is more on the psychological – oppressive feelings, the sense of things closing in, Vera getting inside her own head – than on heroic exploits, dastardly villains, and implausible twists of fate – like a queering of the genre itself. We follow Vera, in all her complexity, as she poses as a university student and tries to enter the inner circle of a student identified as some sort of communist operative – which includes befriending his mysterious girlfriend, Victoria, who seems to be flirting with her…

Who Is Vera Kelly? puts us right inside Vera’s head, and peels the layers back one by one: via the intermingled flashbacks, we journey through her life, starting with the death of her father and her difficult relationship with her abusive mother, moving forward right up to her present day, uncovering what she has been through and what makes her tick, as she herself tries to uncover this communist plot while the Argentinian government crumbles after a coup and she is left stranded there.

It took me a little while to get sucked in to the novel, but I once I was in, I was hooked. The novel fills you with an all-consuming desire to know what happens, both in Vera’s past and in her present… Who is on what side, and who can she trust? What is Vera’s life story? How can she escape Argentina after the coup? And, crucially, was Victoria actually flirting with her? You’ll have to read to find out.