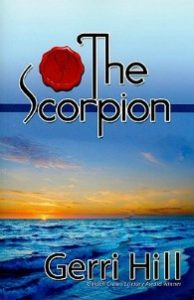 The Scorpion is a standalone mystery from Gerri Hill. It follows an investigative reporter, Marty Edwards, who is looking into a suspicious cold case, and Kristen Bailey, the detective assigned to “help” her – or at least, to spy on her for the department. Cue every possible attempt to drive Marty off the case, multiple murders, going on the run…

I did not like this one, which is odd because it is basically the sort of ridiculous action-thriller you can find a thousand of on Netflix, but queer, and I love those. A highly-qualified and under-utilised detective (thanks misogyny) going on the run with an out-of-her-depth reporter sounds exactly up my alley. But there’s just something about the execution. Part of it is that the first third of the book feels like make-work before the real story begins, part of it is that some of the developments feel completely pulled out of nowhere (like Kristen just happening to know a guy with the exact skill-set she needs to solve her problems, who isn’t mentioned at all until she calls him for help! Or the fact that the villain is obvious, because they’re the only named character who hasn’t been accounted for by the end of the book!) Part of it is probably that the romance takes two people who are bad at forming attachments to people, and isolates them even further from literally anyone who isn’t in their romance, which I find deeply unnerving.

But what my main problem with this book is, is that about a quarter of the way through the book, Marty comes out as asexual (in a very cringe-worthy, allo-centric mess of a scene, that includes an allo character asking if she was abused as a child, and how many orgasms she’s ever had, because apparently those are appropriate questions to ask someone you met three days ago). I was tentatively excited about this – except that her arc becomes one of “perhaps she’s not asexual, perhaps it’s just her trust issues.” If it had been portrayed as someone who thought they were asexual realising they were demisexual, this could have been an interesting storyline, but it never mentions that as an option! Much as Gerri Hill’s Hunter series never even mentions bisexuality as a concept, in fact. Plus, it feels very allo-centric in the way that it’s handled, such as the way that it talks about asexuality as perhaps a medical problem rather than an orientation, and the way that it seems to be conflating “doesn’t feel sexual attraction or enjoy kissing and sex” with “has no interest in relationships” feels really weird to me. I don’t know if this was written before the split model of attraction was popularised, but I feel like this book promised me representation that it then went back on. Marty’s confusion and disbelief at discovering sexual attraction was fine, but the way it was presented as natural and finally feeling “normal” was a bit beyond the pale for me.

Basically, it’s reasonably action-filled, but that doesn’t make up for the somewhat weak plot and poor handling of an ace character. I’d give it a miss.