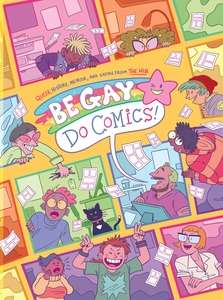 Be Gay, Do Comics is an anthology with more than 30 contributors, all discussing some aspect of queer life. This was a refreshingly diverse and thought-provoking collection. Most anthologies in this vein that I’ve read have played it pretty safe: they’ve usually been very white, and mostly focused on gay cis men, with the overarching message being one of acceptance. Be Gay, Do Comics covers a wide range of topics from a lot of different voices, including many artists of color and trans artists, and includes comics about queer liberation and resisting assimilation.

There is a mix of one-page comics and longer pieces, with some being fairly simple one-off jokes or observations and others looking at queer history. I was especially interested in the comics that looked at queer history and culture that is lesser known, including looking at gay characters in Puerto Rican TV shows, comparing that to the history and present state of LGBTQ rights in Puerto Rico. Another explores how LGBTQ people have been treated in the Philippines, pre-colonialism up to the present. There is also a comic including interviews from queer parents raising kids in Malaysia.

Some comics are biographies of queer people in history I wasn’t aware of, including Gad Beck, a gay Jewish spy, and Baron von Steuben, an openly gay military leader in the American Revolution. Some of these figures at larger than life, others are everyday. Others look at events, such as Hazel Newlevant’s comic about queer uprisings that preceded Stonewall, or an explanation of the Lavender Scare, or the history of the rainbow flag.

Of course, there are also a lot of personal stories included. Some talk about exploring their gender, or coming out. One is about being non-binary while taking folk dancing lessons. Another talks coming out in their late 30s, and the pride and embarrassment and mourning of that–mourning for their younger out queer self who never was. While I’m used to LGBT anthologies being mostly cis gay men, there were lots of trans comics in this one, and even an intersex contribution. There was also a variety both in identities and politics, including a comic about gay Republicans, comics about gatekeeping in the queer community, and one about gay liberation.

It’s hard to speak about an anthology like this in a cohesive way, because they are all so different: in art style, tone, topic, and identity. Overall, I really enjoyed it. Although as always there were some comics I liked more than others, there weren’t any that I felt were weak. It’s a great opportunity to be exposed to a lot of different artists as well. This is one I would happily recommend. It’s not focused specifically on lesbians and bi women, but there is definitely sapphic representation. I’m happy to see that queer anthologies are expanding to be a little more challenging and diverse than they were just a handful of years ago.