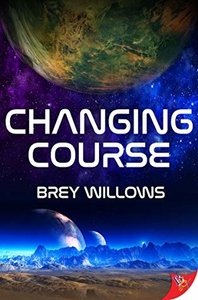 Brey Willow’s Changing Course opens with Jessa and her crew abandoning their damaged spaceship and crashlanding on Indemnion – a planet so ill-regarded that most shipping routes don’t go near it. Fortunately for her, she and her crew are rescued by Kylin, a scrounger with a heart of gold, who takes Jessa under her wing as they fly across the planet looking for survivors.

I had very mixed feelings about this. My intial reaction on twitter was “This feels like someone’s f/f Star Trek/Star Wars crossover fic,” which probably coloured my read of it as someone who’s only tangentially aware of Star Trek. It’s hard to say how much of that feeling was based on the background politics of space (which are conveniently ignored because the protagonists are stuck on a planet that no one wants to go to), and how much was based on the fact that Jessa is supposed to be from a planet where emotions are frowned upon so thoroughly that most people are able to ignore them entirely. We don’t really get to see that though, because she’s quite emotional and open even from the start, instead of the emotionally repressed robot I think that I was supposed to assume she was based on her character arc. It feels like Jessa’s almost a blank slate, especially compared to how involved and dramatic Kylin’s backstory is in comparison. I think its intentional, but it does give the impression that her life now revolves around Kylin.

It doesn’t help that the problems are set up and solved too quickly – Jess and Kylin run into a problem, a few paragraphs later they run into a helpful side character who can solve their problem while also making pointed observations about their relationship, and the problem is solved as quickly as it arrived. The structure is repeated all through the book, and it works for introducing more of the world and keeping the action moving, but it meant that it didn’t feel like there was much tension. Perhaps if the narrative had really leaned into that and built on its episodic bones, it might have been more consistent! And for all that a lot of the world was introduced, the actual world building felt a bit scant. Not in terms of how it was described, because some of the imagery in it is beautiful, but in terms of how Indemnion is structured socially beyond “rich people live here, lower classes live here,” which doesn’t work for a story where at least some of the problems are of a planetary scale. And quite frankly, I have questions about the ending though, because all of Jessa’s objection as to Kylin’s life as a fighter was resolved way too quickly. Jessa has SERIOUS qualms Kylin’s ability and choice to do violence, which feel like they’re shoved to one side rather than addressed. And I’m very disappointed in the epilogue, because it crams so many cultural and relationship changes into a small space, when that one chapter could have been an entire book on its own. … Also I’m assuming that “and lo the slavers are enslaved themselves due to the prison-industrial complex” is supposed to be dramatic irony, because otherwise what the hell.

All that said, it did move quickly and have some cool world-building and setting, and I was very fond of Asol, a young adventurer that they pick up while they’re travelling. I think my biggest problem with it was that it didn’t give the story enough time or depth to actually explore all of the cool things it set up.