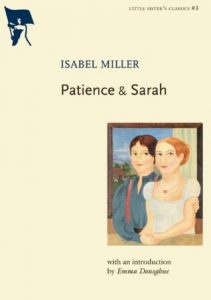 For reasons I can no longer remember, I was reading an article about operas when it mentioned an opera about lesbians called Patience & Sarah, which I am sort of upset I have never heard of since I have worked at two different operas. Then I looked into it more and found out it was based on a book, which in turn is based on two real women. Since I find a book a lot easier than I can summon forth an opera production, I eagerly picked up Patience & Sarah by Isabel Miller, a book about two ladies in 1800s Connecticut who want to take up a life together.

The best thing about Patience & Sarah is that our protagonists take approximately half of one conversation to fall violently in love with each other. Patience is an “old maid” who lives with her brother and his wife under the strict provisions of her father’s will. Sarah has been raised as her father’s “son” since he has no sons and she is the oldest, and she has a plan to leave and get herself a farm out in central New York. Patience takes one look at this tall, awkward lumberjack woman with a half-formed plan and is immediately like “I would die to protect this precious cinnamon roll.” A sentiment echoed by many readers, I feel. They’ve barely been alone together before Patience asks Sarah to take her along when she leaves to buy a farm. They face resistance from other of their families, and Sarah goes journeying on her own for a while, (CW: there is vague and non-descriptive violence against Sarah from her father in the form of a beating), but they are both so steadfast in their growing affection for each other that they succeed in carrying out their plan and set out to buy a farm together.

Patience & Sarah has a persistent theme of journeying, both literal and emotional. Their main goal is to journey together to buy a farm. When their relationship is (temporarily) broken up by their families, over Sarah’s strenuous objections but due to Patience’s reluctant capitulation, Sarah heads off buy herself, disguised as a boy, and spends some months on the road. She takes up with a traveling salesman called Parson and learns a lot about how the world operates outside her home county. Parson also teaches her how to read. They also finally get to journey together to purchase their farm, growing even closer and figuring out how they’ll support each other when they’re on their own. Emotionally, Patience reacts to her family’s negative reaction by retreating from the relationship out of fear of community shunning. She doesn’t feel like she’s wrong to love Sarah, but she’s not sure she can bear the consequences. Her emotional journey is the slow realization of what she does and doesn’t want to live without. She flips the script upon Sarah’s return, and is the one to insist that they fight for a place where they can live their best lives, while Sarah, made cautious by the hardships she’d endured, is now more willing to settle for whatever they can get in a sort of “don’t ask, don’t tell” situation. It made for a compelling plot, because I was rooting for them to figure themselves out the whole time.

The other interesting thing about this book is its exploration of queer acceptance in rural areas, gender roles, and family. Sarah was raised as her father’s son – not as a boy, but in the role a son would take. She helps him with his lumber business, dresses in men’s clothes, and is inexperienced in more traditionally feminine dress and pursuits. She has no problem setting off as a boy, has confidence in her skills at building and running a farm, and later on thinks of herself as Patience’s husband. Everyone in town looks at her as a very improper woman, and feel that Patience, who is of a higher social status, should not associate with her. Still, everyone either doesn’t or takes care not to guess at the physical nature of their relationship until they can’t anymore. Patience’s relationship with her family is equally as interesting. It seemed like her father never expected her to marry – did he guess? – and her brother Edward, while feeling like he has to act conservatively, actually helps her and supports her as much as he is able. He ends up one of their most necessary allies. It makes for an interesting picture, not just of the 1800s when it was set, but the 60s during which it was written.

In conclusion, I’m not sure how this book isn’t more talked about as an early gem of lesbian fiction. It was delightful and at times very sweet. The characters and plot were nuanced, and yet, despite the at times heavy themes of homophobia, the book kept its light and hopeful spirit. I have spent a decent amount of time in my head building out the ending and making their farm together a successful, idyllic place. I would highly recommend tracking down a copy and spending a delightful couple of hours rooting for these two precious cinnamon rolls.