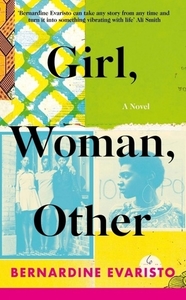 It felt like I was seeing the vibrant front cover of Girl, Woman, Other everywhere (or at least all over lesbian bookstagram), so when it won the Booker Prize for Fiction, I decided it was finally time to buy a copy and see what the buzz was about.

The book follows twelve loosely-connected characters, each section switching to a new point of view. It begins with Amma, a black lesbian playwright, whose production of The Last Amazon of Dahomy is about to open at the National Theatre. After so many years living as a counter-cultural socialist activist, making it into the mainstream is both a source of pride and worry for Amma – is it radical for her play about black lesbians to achieve such a platform, or is she selling out?

From Amma, we springboard off into the lives of the other characters. Most of them (but not all) are black British women. Many of them (but not all) are queer. Some of them are closely connected – there’s Amma’s headstrong daughter, Yazz; her best friend and former business partner, Dominique – and some of them are several degrees of separation away – Carole, the hotshot investment banker who’s attending opening night; Morgan, the non-binary influencer caught up in a Twitter beef with Dominique.

Normally when I read a book that switches between lots of characters I get frustrated. There are always some stories I’m more interested in hearing, and some characters I care about more than others. I was worried I would feel the same way going into this book.

But that wasn’t the case at all – each one of Evaristo’s voices was so compelling that I was engrossed immediately every time. The experience felt something like getting into a Wikipedia rabbit hole, where you bounce from article to article as interesting tidbits catch your eye. Then you look up and you’ve lost six hours!

Of course, there were still favourite characters among them. I loved the determination of Bummi, a Nigerian immigrant and widowed mother who’s working hard to build a cleaning empire – and looking for love again with both women and men. But I think my favourite was Hattie, a crotchety mixed race nonagenarian who grew up in the agricultural north of England. After a lifetime of hard work on the family farm, she despairs of her lazy descendants – with the exception of Morgan, who often visits with their girlfriend to help out.

Not all of the characters are so easy to like. Dominique, for example, founds a trans-exclusionary ‘women’s’ festival. Penelope holds racist beliefs her entire life, and only starts to learn at the age of 80 that things aren’t as black and white as her parents taught her (including her own DNA). But even when you don’t agree with one of Evaristo’s characters, you’re still interested to learn more about them – and it’s a mark of wonderful writing that Evaristo can switch hats and ideologies so skilfully.

Without a unifying plot, what connects these voices are the themes of race, gender, class, and identity in general. Instead of providing a ‘one-size-fits-all’ answer to any of these, Evaristo examines them from every angle. It feels like she’s giving a cheeky wink to anyone who wants to read a novel about a black woman’s experience as a novel about the black woman’s experience.

If I’m making it sound intellectual and literary – well, it is, but it’s also captivating. I nearly missed my stop on the tube more than once because I was too glued to the pages to pay attention to anything else. It’s not a light book – it deals with serious topics like (of course) racism, as well as abuse, rape, and addiction – but it’s very readable, and there are plenty of fun, heart-warming moments mixed in there too.

I’m glad I finally gave into the social media buzz to read this book. It was well-deserving of its Booker win, and I hope it goes on to receive even more recognition in the future.