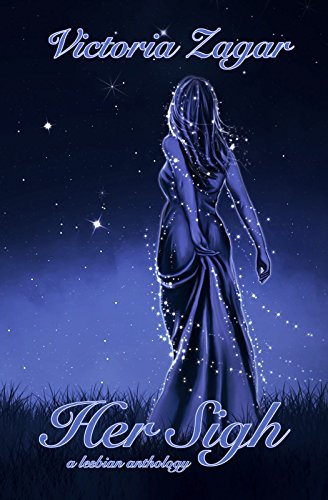 As most of you know, I LOVE short story collections, so when I came across Her Sigh: A Lesbian Anthology by Victoria Zagar, I thought I’d give it a go.  Short stories don’t get a lot of love in lesbian literature, (most folks want to read romance novels), so I’m always excited when I see that a new collection has been released.

To start, Her Sigh isn’t quite what I expected. Silly me, when I saw that it was an anthology, I thought it was a multi-author collection; it’s not. All fourteen stories are by Zagar, and they mostly have a similar theme: love. Zagar also works hard at creating dystopian/fantasy settings where love seems to conquer all, and in a few of the stories, it does.

For example, both “Sophie’s Song” and “Expiration Date” focus on post-nuclear war society, although neither story gives us much information on the wars, or how far into the future the stories are set. “Expiration Date” is a rather interesting take on family in an era where population control is paramount to society’s existence. In order to quell married couples’ desire for children, the government has come up with a novel solution, the Realichild, where couples are allowed to raise a child for limited period of time. Revealing anything more might spoil the story, but I really liked the way that Zagar normalizes the lesbian couple, but problematizes the ways in which the nuclear family (no pun intended) is still central to a happy family.

A few of the other stories read a bit like fairy tales or fables: a princess must decide whether or not to marry a prince when her true love is a female knight; a young woman seeks an arranged marriage to save her family, but is in love with the village seamstress, and another young woman realizes that she is the reincarnation of an ancient creature’s lover.

Overall, the collection is a solid read although there were a few times when I just rolled my eyes. How many cabins in the woods can there be in lesbian la-la land?  How many old world villages? Additionally, a couple of the stories felt a bit rushed. Short stories are difficult to write, so I understand that everything can’t fit, but I do think that if you’re going to create dystopian societies, space colonies, or old world villages, then make sure that they don’t all feel the same, otherwise your readers might become bored.  Although this wasn’t really my cup of tea, if you like lesbian romance with a flair for the otherworldly thrown in, this may be the collection for you.