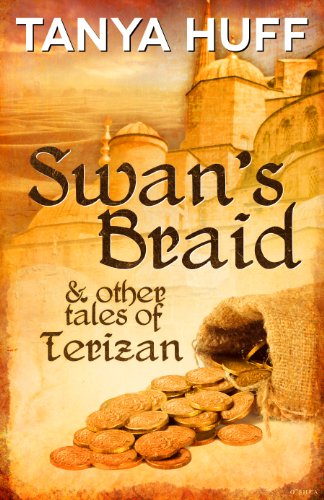 Fantasy literature is rife with ‘clever thief’ protagonists for the vicarious entertainment of the virtuous, like Bilbo Baggins, but most of them are not even female, let alone lesbians. Swan’s Braid and other Tales of Terizan gives us the wily but honorable Terizan, who waltzes away from the first story in her collection with the affection of a female mercenary with whom she maintains a casual romance for the remainder of the book. Most of Terizan’s adventures aren’t love stories, but “capers”–she gets assignments from the Thieves’ Guild, which she joined pretty much for their health insurance plan (“the guild takes care of its own,” and she’s worried about what would happen if she ever got more seriously hurt during one of her falls from a mark’s window. It’s that kind of book.)

The plots themselves are pretty clever, with inflection points and twists and rising action and punch lines, reminding me of Maurice Leblanc’s dashing gentleman burglar Arsène Lupin, only in a fantasy setting with a lesbian heroine. Whether Terizan’s adversary is a ghost, a wizard, a prince, or the cult of an upstart goddess, reading about her besting them was satisfying and not stressful at all because they’re written in that “good old fashioned fun” way, not grimdark.

The prose is easy to follow, with the occasional evocative bit like “[…]sales pitches as wilted as the vegetables[…]” Huff’s worldbuilding is unobtrusive and “generic fantasy” enough to be pretty easy to understand, yet with enough originality that I didn’t feel like I was reading homage or parody. And I really can’t say enough good things about how relaxing it is to read a story about a woman Doing Things in a shady underworld without having to fear gendered violence. The villains in this book are mostly men, but their offensives and defenses against Terizan never include a sexual element.

I love so much about what Terizan’s stories have and don’t have. Her best friend is a bisexual male sex worker, her adventures aren’t gendered (in other words, she gets to interact with her fictional universe pretty much the way male characters usually get to), and her three bosses at the Guild are a man, a woman, and someone who “could be either or neither” whose gender is never further discussed. These days things like this are becoming easier to find in SFF, at least if you’re like me and play Heimdahl with indie LGBT publishing, but this particular story was written in the NINETIES. So I quietly hold this up to those who go around leaving skeptical, ossified reviews on fiction with nonbinary characters.

I would love to see these done in graphic novel form.

(Warning for the word ‘whore’ used a few times; I think it was only said by the sex worker character but I can’t actually remember and I returned my eBook to the library already.)

Find more of my reviews here.