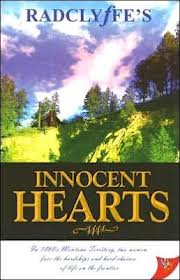 It is early 1865, and the Beecher family: Martin, Martha and their eighteen year old daughter Kate, have moved from Boston all the way to New Hope, Montana Territory, giving up the comforts of the east to experience adventure in the west. Kate, just now the right age to marry, has enjoyed more freedom than many other young women, such as her father letting her pursue photography. She is sweet with an inquisitive streak, gladly wanting to explore her new world. Kate meets Jessie Forbes, a young female rancher who owns her own land, wears pants and carries her own gun like the men. She is the definition of independent, and is respected in her town. When Jessie meets Kate, the two women begin to develop strong, tender feelings for each other. Soon, they are deeply in love and want to spend their lives together.

Innocent Hearts does an excellent job capturing the love between Jessie and Kate, from their warm words to their tender lovemaking. Both women are good and honest with each other and their love feels genuine and completely right.

There are many obstacles throughout the book that Kate and Jessie must overcome, such as bandits, an epidemic, and the narrow-mindedness of Kate’s parents. Mr. and Mrs. Beecher have high hopes for their daughter to find a good man to marry, so they are confused when Kate refuses to take the handsome men that court her as husbands. Having never been around openly gay people, Kate’s parents are completely shocked when Kate tells them the truth. They try to prevent the women from seeing each other again, and must reconcile to their daughter’s happiness. The reactions of Mr. and Mrs. Beecher is, in my opinion, accurate for how two parents used to the old ways would respond to their gay or lesbian child coming out to them in the 1800s. And their feelings of shock, discomfort, denial and sadness mirror the reactions of many present-day parents as well as past ones.

All the characters have their own quirks and flaws, and their emotions are weaved into the storyline in a way that adds to it, such as Mae, the prostitute who has feelings of her own for Jessie. She is an interesting addition to Innocent Hearts with her wanting her friend to be happy, but at the same time wanting Jessie to be hers. Mae’s conflicted feelings can relate to a lot of people suffering from the same unrequited love.

Innocent Hearts tells its audience how rough and difficult ranch life was in the old west through Kate and Jessie’s experiences. It paints a picture of danger and hardship, but also shows the good side of humanity through the love between Kate and Jessie, and the camaraderie of the citizens of New Hope. Loyalty and friendship runs deep in the book, and gives a perfect sense of hope for things working out.

For anyone looking for a lesbian romance in the west, this is a great place to start. The story is like a beautifully done painting, with every part of it adding up to make the story more real and giving a great quality. Innocent Hearts should be among the classics!