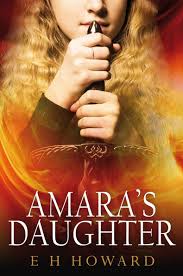 For my first book review for the Lesbrary, I decided to go with a fantasy novel called Amara’s Daughter by EH Howard.  I have a soft spot for fantasy, especially the kind of female-warrior-turned-hero that Tamora Pierce captivated me with as a child. How great it would be, I thought, to read a lesbian strong female warrior fantasy book. It would basically be all the boxes, ticked. So I went into this book with high hopes, as the description says:

“Friend, lover and more, Amara’s Daughter is a turbulent rite of passage story tracing Maryan’s growth from naive schoolgirl to the woman destiny needs her to be.”

Disappointingly, I came away with very mixed feelings. To focus on the good points first, there were were threads of an interesting plot. There was complexity and intrigue in some of the ideas presented, and that kept me reading through to see what the conclusion would be.

The plot itself runs roughly like this: a young woman named Maryan lives in her vanished warrior mother’s shadow.  She lives in a small nation of warrior-women called Serenia, where men aren’t allowed to hold weapons. The queen uses her as a pawn in her political games. This goes tits-up when her new husband, the prince of a neighboring nation, is killed by dark forces and Maryan is forced to flee for her life back to Serenia.  In Serenia, Maryan and her band of friends must save the country.

But I feel that this book needed a lot more editorial work before it was ever published, and this unfinished feel made it much more difficult to become absorbed in the story.  My biggest complaint here was the pacing, which was, to put it bluntly, bizarre.  Entire events were skipped or mentioned only in a brief sentence. Plot twists were not explained, leaving me flipping back and rereading multiple times to try and puzzle out what happened.  I believe several years are meant to have passed through the course of the book, but there is little to hint at that except for a few sentences like “she’d grown from a child to a woman” etc. There is no hint of character growth, of learning from prior events. Characters die and are whipped away into the past with nary a tear shed nor emotion felt by the surviving characters.

I can’t even call it fast-paced, because it really just feels like someone smashed out a first draft and called it a day. This book would benefit greatly from further editing and revisions.  In addition, there were many interesting questions presented in the story that were never answered or brought up again, and one thing I hate is loose plot threads there for no reason. For instance, where did Maryan’s mother go? The title of the book is Amara’s Daughter, for goodness’ sake. I’d imagine Amara’s storyline would rate a passing conclusion, but no.  The same with the ‘dark forces’ that eventually kill Maryan’s  husband. What are their motivations? What happened to them? Nothing is explained.

But putting all these plot quibbles aside, what about the love? Now, I was expecting lesbian themes here, but what I got at best was bisexual.  At the beginning, Maryan shares a bed with one of her fellow female warriors-in-training, which is presented as the done thing in Serenia.  Later, she develops a crush on a visiting male, and when she’s shipped off to be married to a neighboring king, she falls in love with him (quickly, with no hint of her inner turmoil, apparently overwhelmed by desire for his penis.)  Later still, she quietly goes back to her old warrior friend. There’s nothing wrong with this, except that Maryan’s male relationships are presented with passion and delve into her emotional love for them, while the female relationships are presented in passing, as though they sleep together for lack of something better. This inequality in presentation sits uneasily with me.

Overall, I must give credit to the author for creating a strong enough plot to keep me reading despite the poor pacing, editing, and questionable presentation of lesbian themes. However, I’d like to see this book undergoing heavy revisions and republished, as it does hold promise, but in its unfinished state I find myself unable to recommend it.