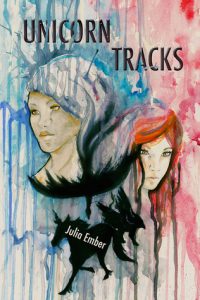 Located deep in the heart of Nazwimbe is a safari unlike any other. Tourists and researchers come from all around the world in hopes of catching a mere glance at the incredible creatures who roam nearby. The Harving’s, a father-daughter team hailing from Echalend, have come specifically in search of the mystical white unicorn, a creature they have spent their life studying. They are assigned to Mnemba, a sixteen-year-old tour guide who knows the safari like the back of her hand, and who has come to work for the safari after a tragedy drove her from her home. For Mr. Harving, this is the opportunity of a lifetime. For Kara Harving, this is her final chance at adventure before being forced to marry a man she doesn’t love. For Mnemba, this is simply business. As their time together progresses, however, it becomes clear that this tour will be none of the above.

One of the things I most enjoyed about Unicorn Tracks was the world building. Nazwimbe is an incredible country, and it’s amazing how much Ember conveys about its customs and beliefs in this short novel. I never felt overwhelmed by the amount of information given, as it is weaved so seamlessly into the story. Not only do we learn about the culture of this fictional country and its different towns, we also meet an array of incredible creatures, all of which are mythical in our world, but roam free in the plains of Nazwimbe. Often I felt as though I could see the creatures directly before me based on Ember’s words. It was as though I was on the safari alongside Mnemba and the Harving’s.

It takes a bit of time for the plot to get moving, but once it does it pulls you in. It’s unique, and exciting, and does an incredible job of showing the character of our protagonists without ever making it feel like too much. Once things get started they advance at a steady pace, bringing you to a satisfying conclusion in a way that feels natural. Again, I felt as though I was living this adventure alongside our heroines.

In the romance, Ember tackles some heavy issues, though for the most part I feel she does so well. Mnemba and Kara come from different worlds, and their clashing cultures cause tension occasionally. They learn to work together, though, both in their adventuring, and in their private lives. Although the story takes place over a short period of time, their romance unfolds sweetly. It does feel a bit fast, and yet it also feels natural that they would feel such strong affection for each other after everything they’ve gone through.

As I mentioned, this book does deal with heavy subject matter. Warnings include rape, physical assault and violence, sexual harassment, slavery, and animal cruelty. While these issues are dealt with well for the most part, there is one moment where [spoiler alert] Kara and Mnemba are becoming intimate and Kara comes across as quite insensitive to Mnemba’s traumatic past. This moment of insensitivity is never fully dealt with, and feels odd, as she has been previously quite supportive [end spoilers].

Overall, Unicorn Tracks is a delightful novel set in a fantastic world, with a sweet romance, and an intriguing plot. If you think you will be able to handle some of the heavier issues dealt with within the story, then I highly recommend it.