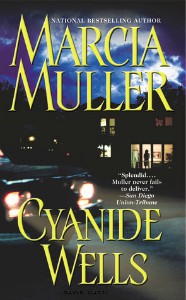 This book is interesting not so much for the mystery, which is a bit less than so-so, but for the fact that it was penned by Muller, who, along with P.D. James, Sue Grafton, and Sara Paretsky, are often considered the first modern women detective novelists. James’ An Unsuitable Job for a Woman (1972) was the first—and likely the best—of these, but only one more Cordelia Gray book followed before James went on to other characters. Muller’s Edwin of the Iron Shoes (1977) began the long career of P.I. Sharon McCone, who has now appeared in at least 34 novels. Why is this important? Because out of all of the famous women mystery writers we see on the best-seller lists, including Rita Mae Brown, Patricia Cornwell (both of whom identify as lesbian), Janet Evanovich, and J.D. Robb (who do not), Muller is the only one who has written a novel with a lesbian protagonist. And even here she kind of hedges her bets by giving her a male counterpart, who shares the story and comes to the rescue at the end.

The story goes something like this. Carly McGuire, editor of a small-town newspaper, picks up hitchhiker Ardis Coleman, who is on the run from demons in her past. The two fall in love and set up house together. Fourteen years later, Ardis disappears on the same day that her ex-husband shows up looking for her. The husband, Matt Lindstrom, has been tipped off by an anonymous phone call as to where Ardis has been living for so long and he plans to confront her not only for leaving him, but leaving him to be suspected of killing her and disposing of her body. But when Ardis runs away again, he and Carly are forced to team up to find her—before something really happens to her.

Carly McGuire is not a particularly well-drawn lesbian, so you won’t get much of a sense of the LGBT community here. Still, Carly is a strong, acceptably likeable character. Her erstwhile life partner, Ardis, is less so. In fact, her character flip-flops like a jumping bean without a hint as to what makes her do so. A much-needed backstory is hinted at, but never delivered. The mystery is not badly conceived, but it is pretty badly executed. It involves the three-year-old murder or a gay couple who happened to be friends with Carly and Ardis. In fact, if you can believe it, Ardis wins a Pulitzer in journalism for her in-depth reporting of the murder. Meanwhile, the dastardly mayor is threatening Carly and Ardis with all sorts of mean, nasty, ugly things if Ardis doesn’t sell him the property previously owned by the murdered couple—property for which Ardis is the administrator. And property which may harbor a rich vein of gold.

Well, after a great deal of searching and interviewing by Carly and Matt (they have alternate, third-person point-of-view chapters), and two suicides that seem to indicate involvement in the gay couple’s murder, the story seems to peter out in the time-honored fashion of having the killer simply be someone who is insane. The writing is professional, but obviously so. In other words, Muller, who has already written well over 40 novels, has to “research” this one—find out the intricacies of the place, how to be a photographer, and other tidbits. The homework shows. I feel nothing heart-felt here, just surface observations. We know little about even the main characters, such as who their friends are, what they drink, their ages–things that make me suspect that the author didn’t know them either.

I guess the best part of this book—aside from the characters of Carly and Matt—is that the two didn’t get together at the end. But that’s one of those things that, if they had, simply would have taken a full star away from the book’s rating. As it is, the rating doesn’t change. Give it no more than a 2.4 as a mystery, 2.0 as a lesbian mystery. I’d say that if you’re wanting to give Muller a try, start with a Sharon McCone mystery. An early one.

Note: Although this is called the second novel in the Soledad County series, it is the only one in which Carly McGuire is a protagonist. I read the first hardback printing of the Mysterious Press edition of this novel.